3.01-02 “Steps into Shadow”
Six months after the events of the previous season, Ezra leads a mission to rescue Hondo Ohnaka from an imperial prison, wielding a new lightsaber and displaying Force skills that he’s learned from the Sith Holocron in the process.

So it’s a new season and Ezra has a new haircut. And he is more abnoxious and reckless. He charges in where he shouldn’t and only survives thanks to his master saving him at the last second.

And in steps Thrawn.

3.03 “The Holocrons of Fate”
Darth Maul captures the crew and tries to exchange them for the Sith holocron. After failing, Maul flees, gleefully muttering “he lives”.

4.04 “The Antilles Extraction”
Sabine is selected to infiltrate the academy and she meets and befriends a fellow cadet named Wedge Antilles. 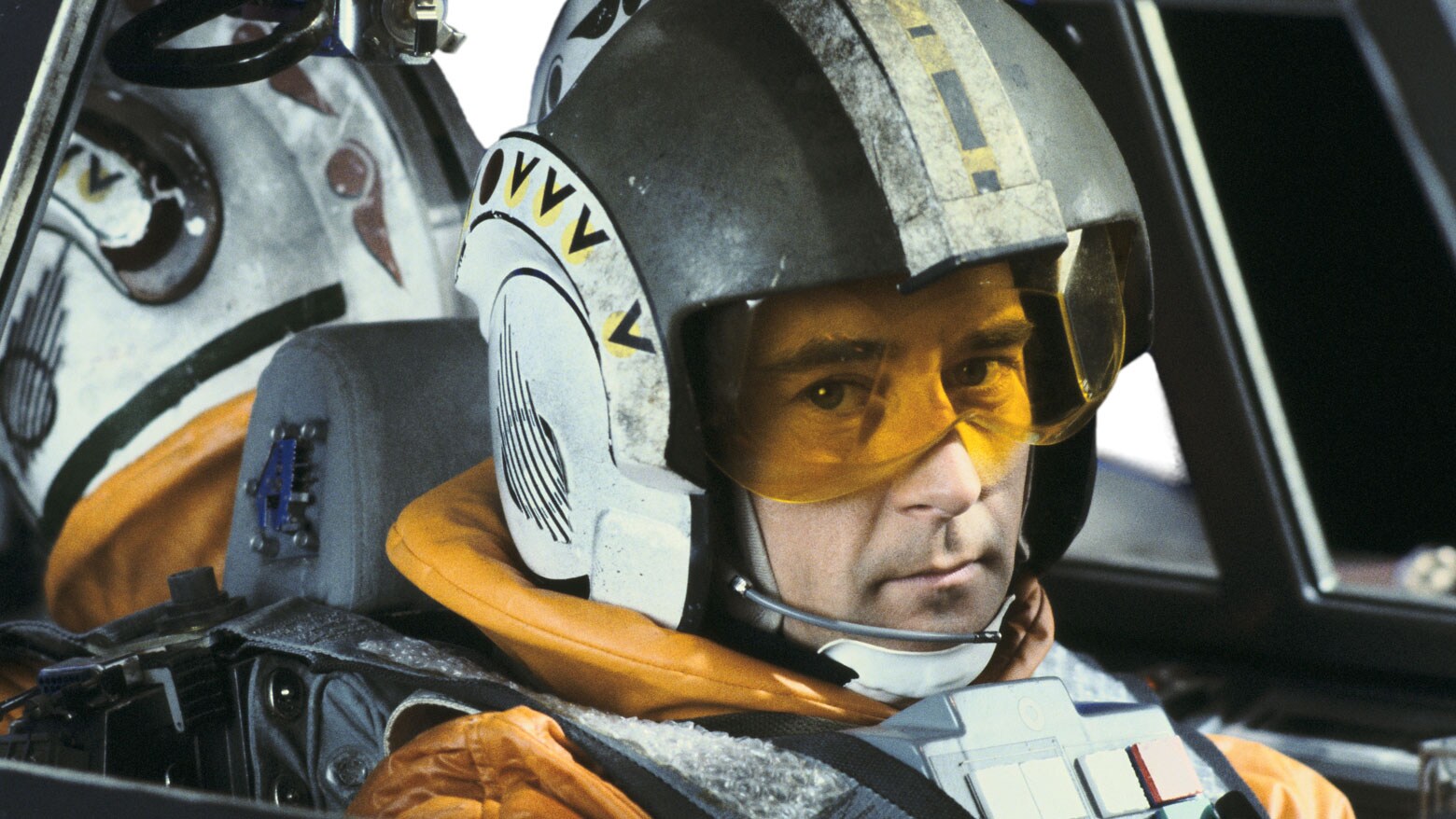 2.21-22 “Twilight of the Apprentice”
Ahsoka, Ezra, Kanan and Chopper arrive on Malachor – a Sith world long forbidden to the Jedi – in search of knowledge.

They soon are attacked by a new Inquisitor, the Eighth Brother, who is hunting a mysterious hermit calling himself “Old Master.”

When Ezra encounters the hermit, he reveals himself to be Maul (Sam Witwer) and offers to help Ezra get into the Temple, aiding him in recovering a Sith holocron.

When the other Inquisitors arrive and alert Darth Vader of their presence, Ezra convinces the group to work together.

Ahsoka finally faces Darth Vader – who has cornered Ezra and destroyed his lightsaber – and comes to terms with his identity as Anakin Skywalker as she engages him in a duel.

At the end we see Vader leave the temple, but what has happeded to Ashoka ?

Note : This is the last episode to take place in 3 BBY.

2.17 “The Honorable Ones”
Kallus and Zeb get stranded on a one of Geonosis’ icy moons. Star Wars does their version of ‘Enemy Mine”

2.18 “Shroud of Darkness”
Ezra, Kanan and Ahsoka. set out for the Jedi Temple on Lothal, where each have a separate vision; Ezra, of Master Yoda, Kanan, of the Temple Guard who is testing him, and Ahsoka, of Anakin/Vader.

2.19 “The Forgotten Droid”
While on a Ghost crew mission to steal fuel, Chopper steals a replacement strut for his original leg. Chopper is separated from the Ghost crew and finds himself stranded on an Imperial freighter. 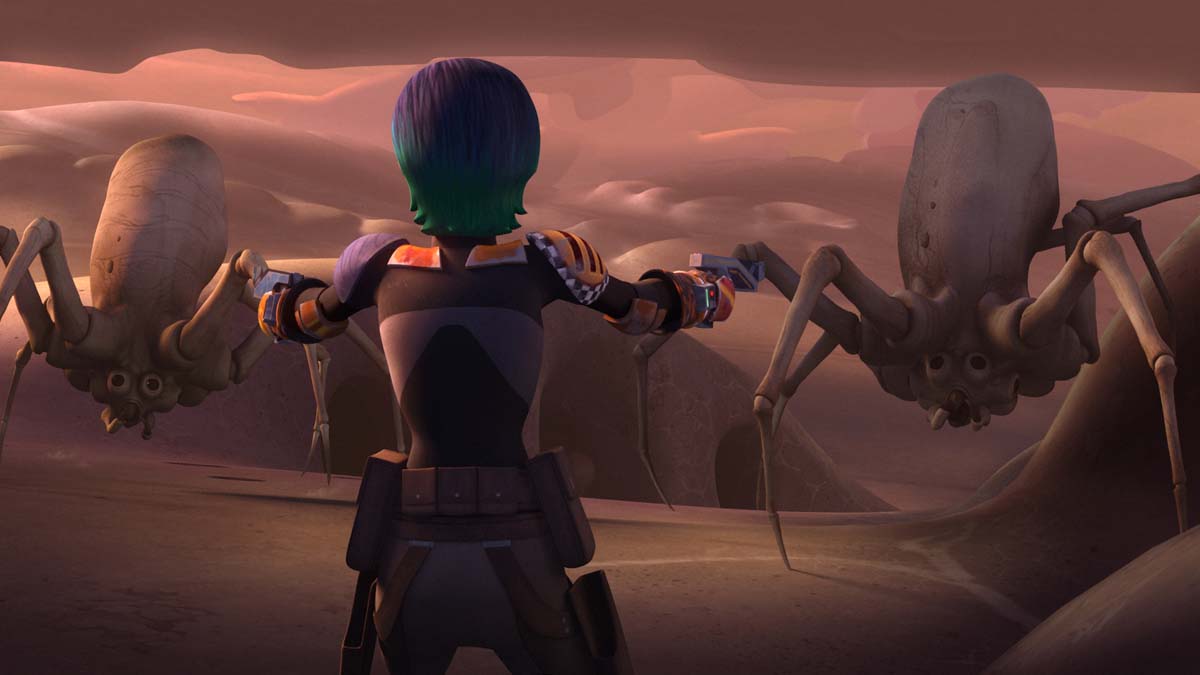 2.20 “The Mystery of Chopper Base”
After finally finding a planet that is safe from the Empire, the Rebel fleet lands to set up their base. However, one of their scouts goes missing after setting up a sensor beacon. It’s big spider time ! 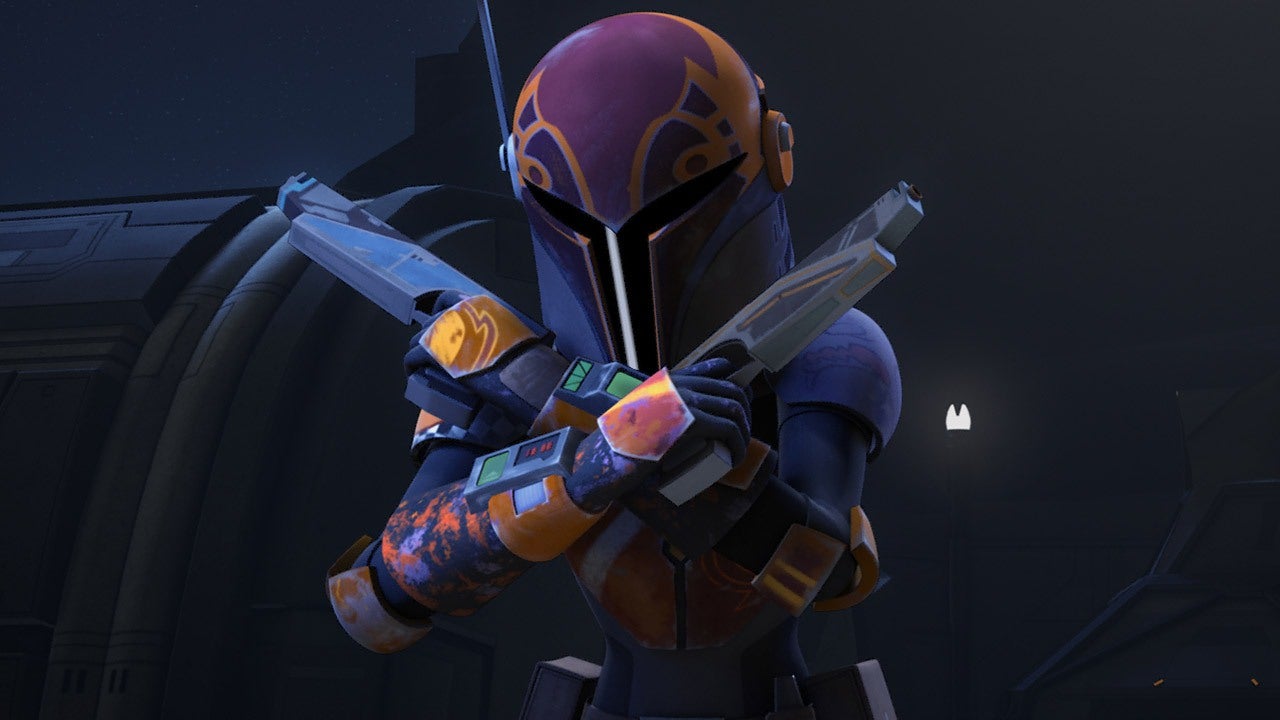 2.13 “The Protector of Concord Dawn”
With the Empire tightening its cordon around Lothal, the Rebels look for a new smuggling route. Hera and Sabine head out to the world of Concord Dawn to request safe passage from the Protectors, the Mandalorian faction that controls the world. 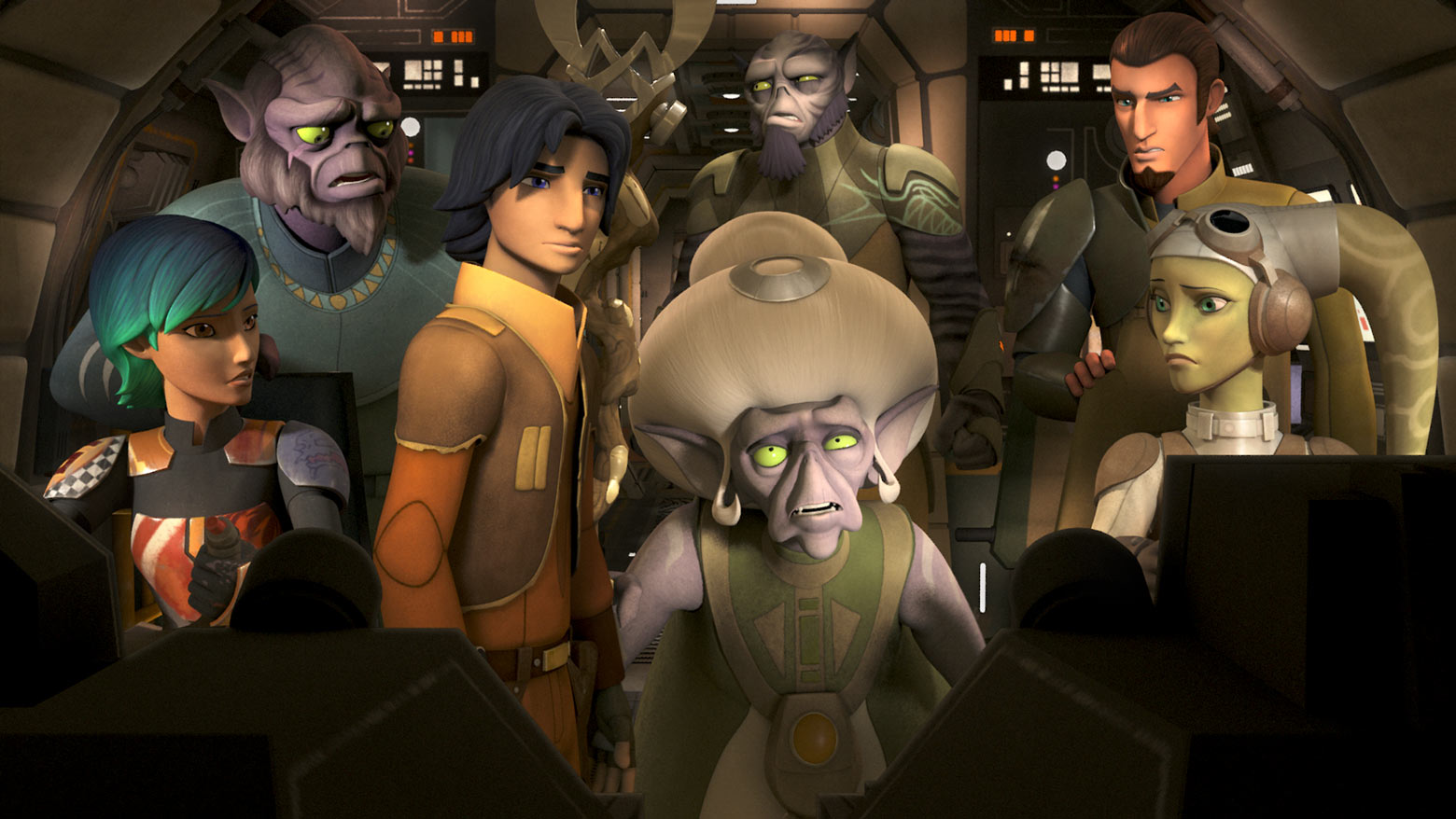 2.14 “Legends of the Lasat”
Following a tip from Hondo, the Ghost crew rescues a pair of Lasats from Imperial custody: Chava the Wise and Gron, who both recognize Zeb as Captain of the Lasan Honor Guard. 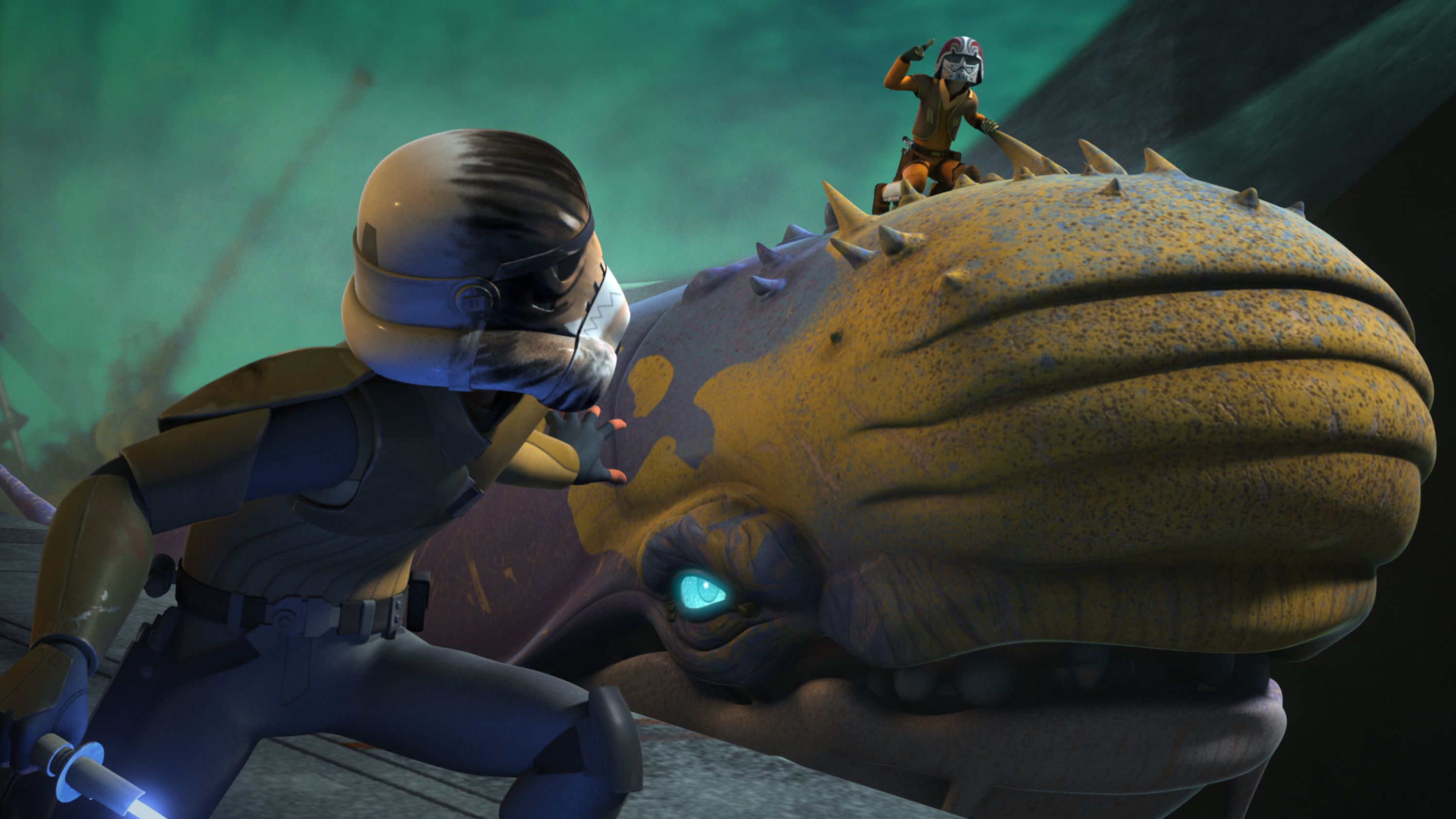 2.15 “The Call”
The Ghost crew is on a mission to capture a fuel shipment from the Mining Guild to the Empire, in order to restock the Rebel fleet’s own dwindling supplies. While travelling to the Guild’s asteroid refinery, the Ghost encounters a flock of purrgil, space-travelling creatures whom Hera considers dangerous. Clearly these creatures are metaphors for whales, and the story has an overtly conservation theme.

2.16 “Homecoming”
In order to provide a safe shelter for their fighters, the Rebels plan to capture an Imperial carrier currently stationed above Ryloth, Hera’s home planet. In order to pull the mission off, the Ghost crew contacts Hera’s father, the famed Twi’lek resistance fighter Cham Syndulla. 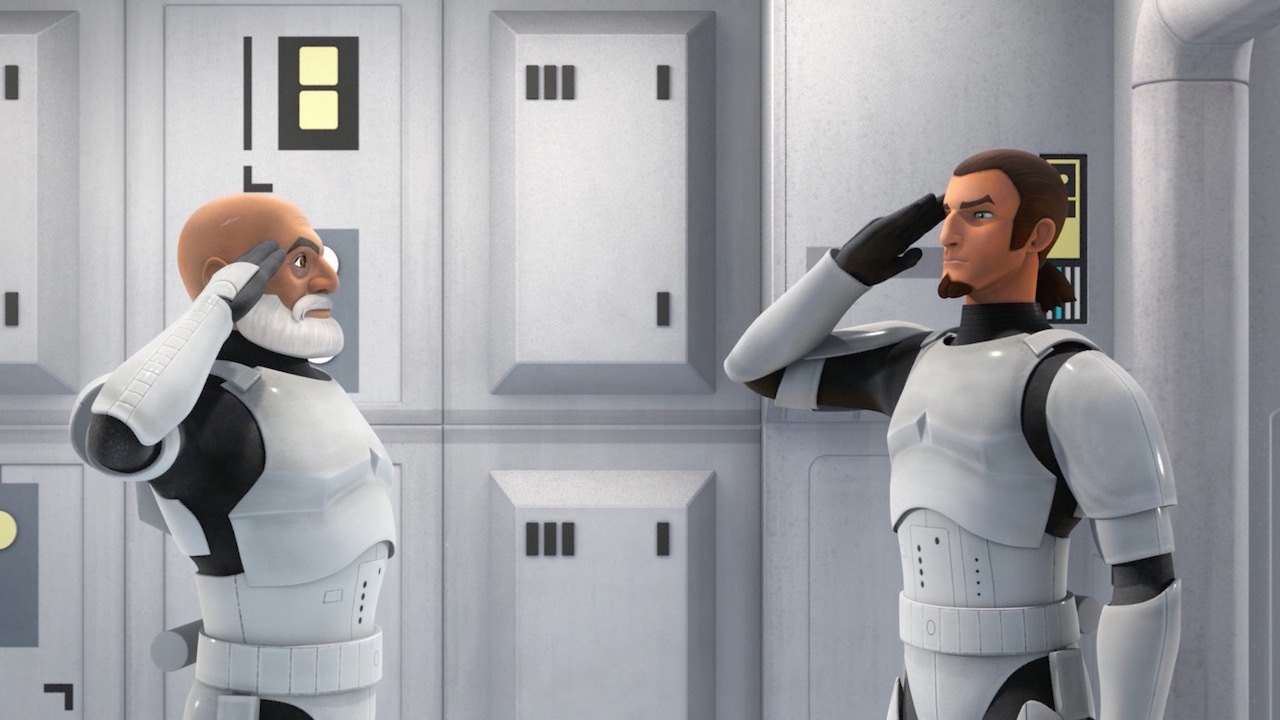 2.09 “Stealth Strike”
Ezra and Commander Sato are captured when a new Imperial weapon—an experimental Interdictor cruiser—generates a gravity well strong enough to pull ships out of hyperspace. Hera sends Kanan, Rex and Chopper to rescue them, using a stolen shuttle, stormtrooper armor, and Rex’s knowledge of Imperial codes and protocols.

Note : This is the last episode to take place in 4 BBY.

2.10 “The Future of the Force”
Ahsoka informs Kanan that she’s continuing her investigation on the Sith Lord Darth Vader, but finding information on him is difficult. In the meantime, she receives word of two sets of coordinates that cross the Imperial net. She heads to look into one of them while dispatching Kanan, Ezra, Zeb, and Chopper to the other.

Ahsoka is stronger that ever, taking on the two inquisitors alone.

Note : This is the first episode to take place in 3 BBY. 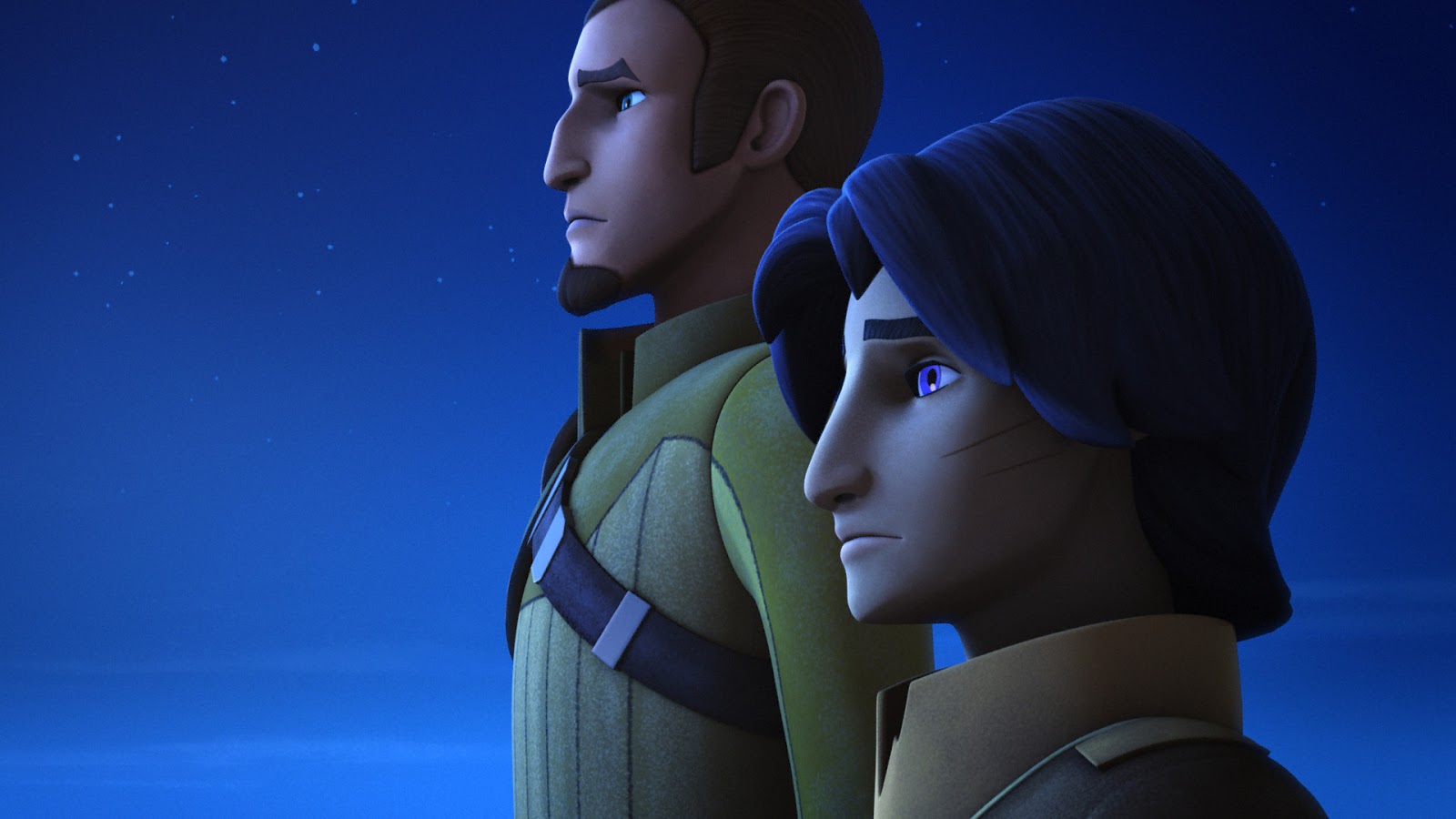 2.11 “Legacy”
Ezra has a vivid dream about his parents, which he is convinced is a vision which will lead him to discover their fate. Hera and Kanan reveal that they have secretly spent months investigating Imperial prisons, and have heard about a recent prison break. As the Ghost prepares to return to Lothal to investigate Ezra’s visions, the Imperial fleet arrives at Garel based on the intelligence from the Seventh Sister’s probe droid. 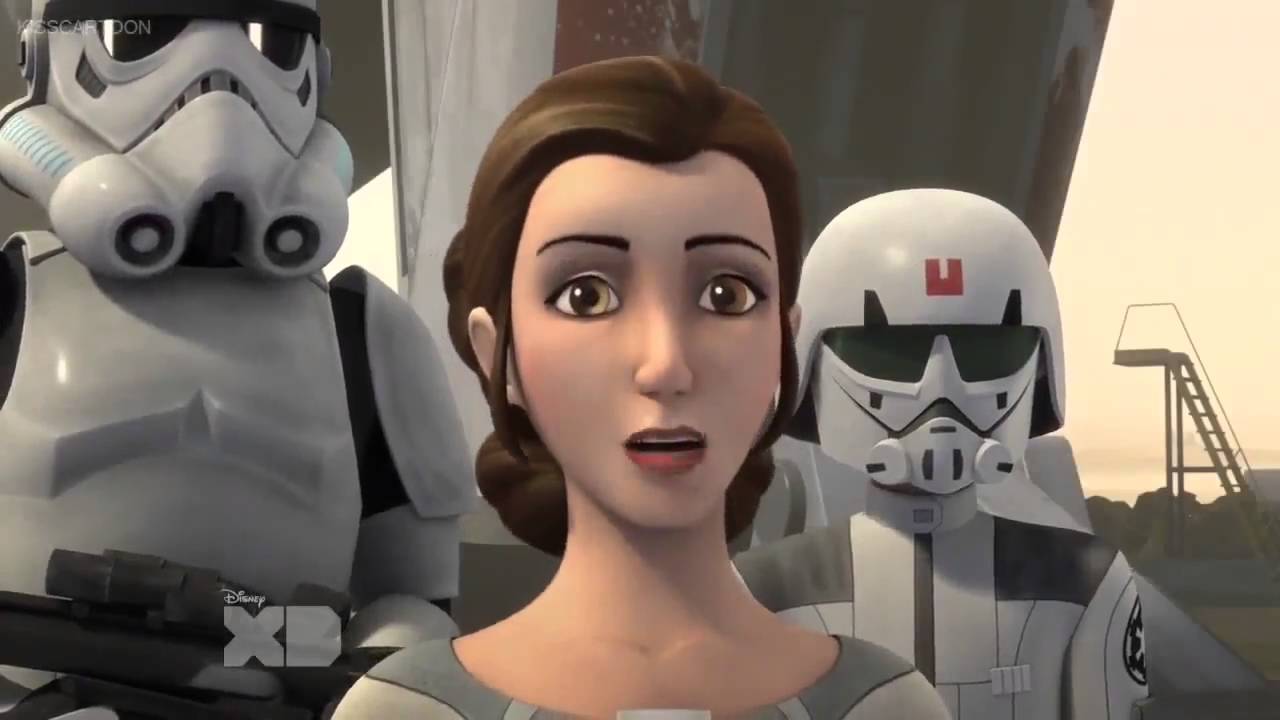 2.12 “A Princess on Lothal”
While Ezra grapples with the news about his parents, the rebels make plans with Senator Bail Organa to secure three much-needed cruisers. Leading the mission is an agent hand-picked by the Senator: his daughter, Princess Leia. 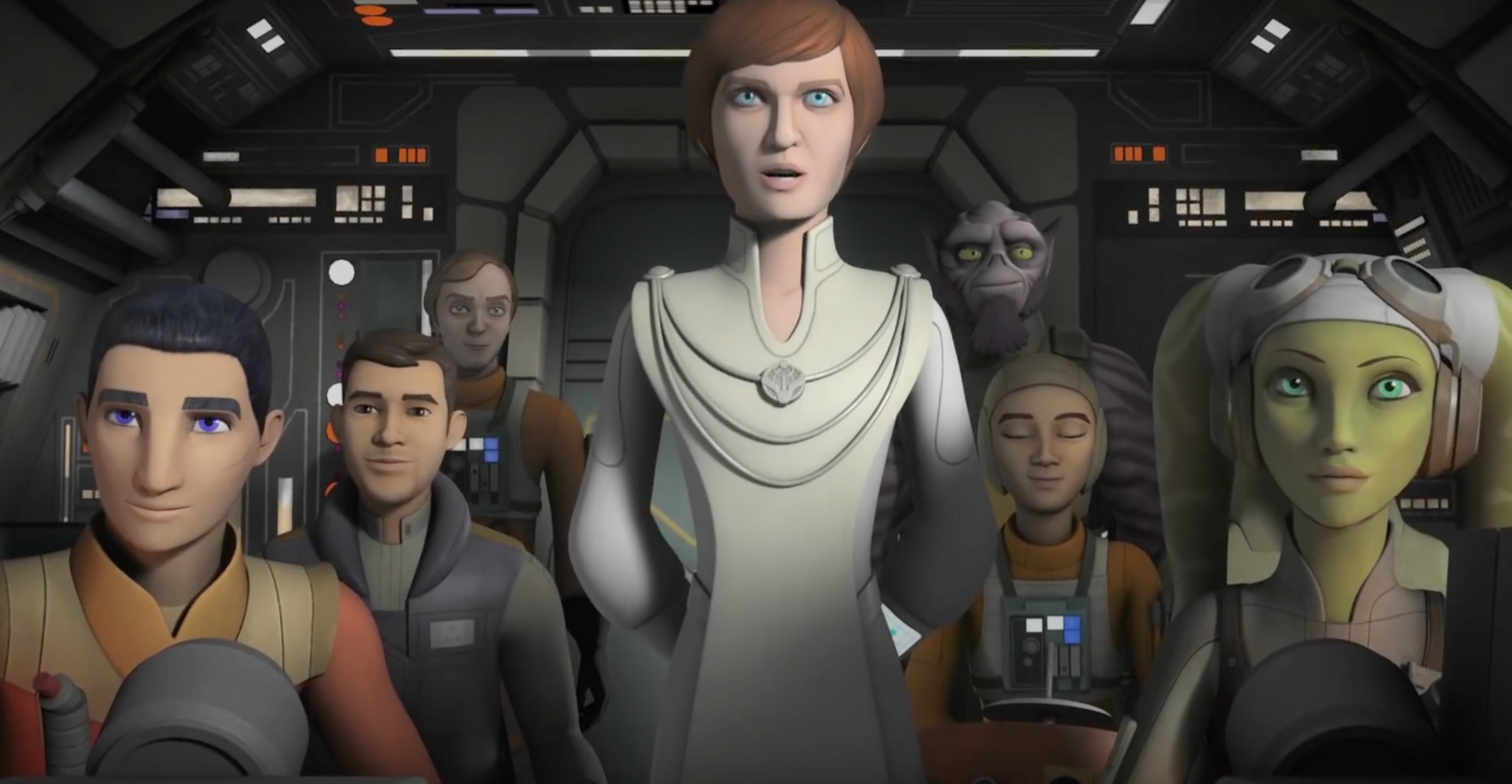 2.05 “Always Two There Are”
Zeb, Sabine, and Chopper, with Ezra volunteering himself to avoid Kanan and Rex, head out to an old republic medical base in search of vital medical supplies only to be encountered by the Seventh Sister and the Fifth Brother. The Seventh Sister captures Ezra and interrogates him about the whereabouts of Ahsoka Tano while Sabine is also captured by the Fifth Brother.

2.07 “Wings of the Master”
Phoenix Squadron tries to break an Imperial blockade in order to provide food supplies to those who need it, but their transport is destroyed and the mission fails. Hera is then tasked go to a planet whose atmosphere is very difficult to fly in to get a ship being built by a Mon Calamari named Quarrie that can break the blockade.

2.08 “Blood Sisters”
Sabine is sent by Hera to acquire an unknown information courier. She goes with Ezra and Chopper and they find that the courier is a clunky droid. They then encounter Ketsu Onyo, (Gina Torres) an old “friend” of Sabine’s who works as a bounty hunter and is now after the droid. Will they ‘make up’ ? Of course… eventually 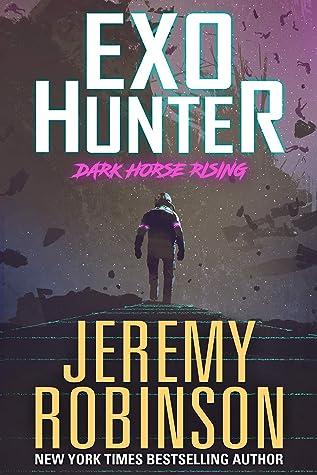 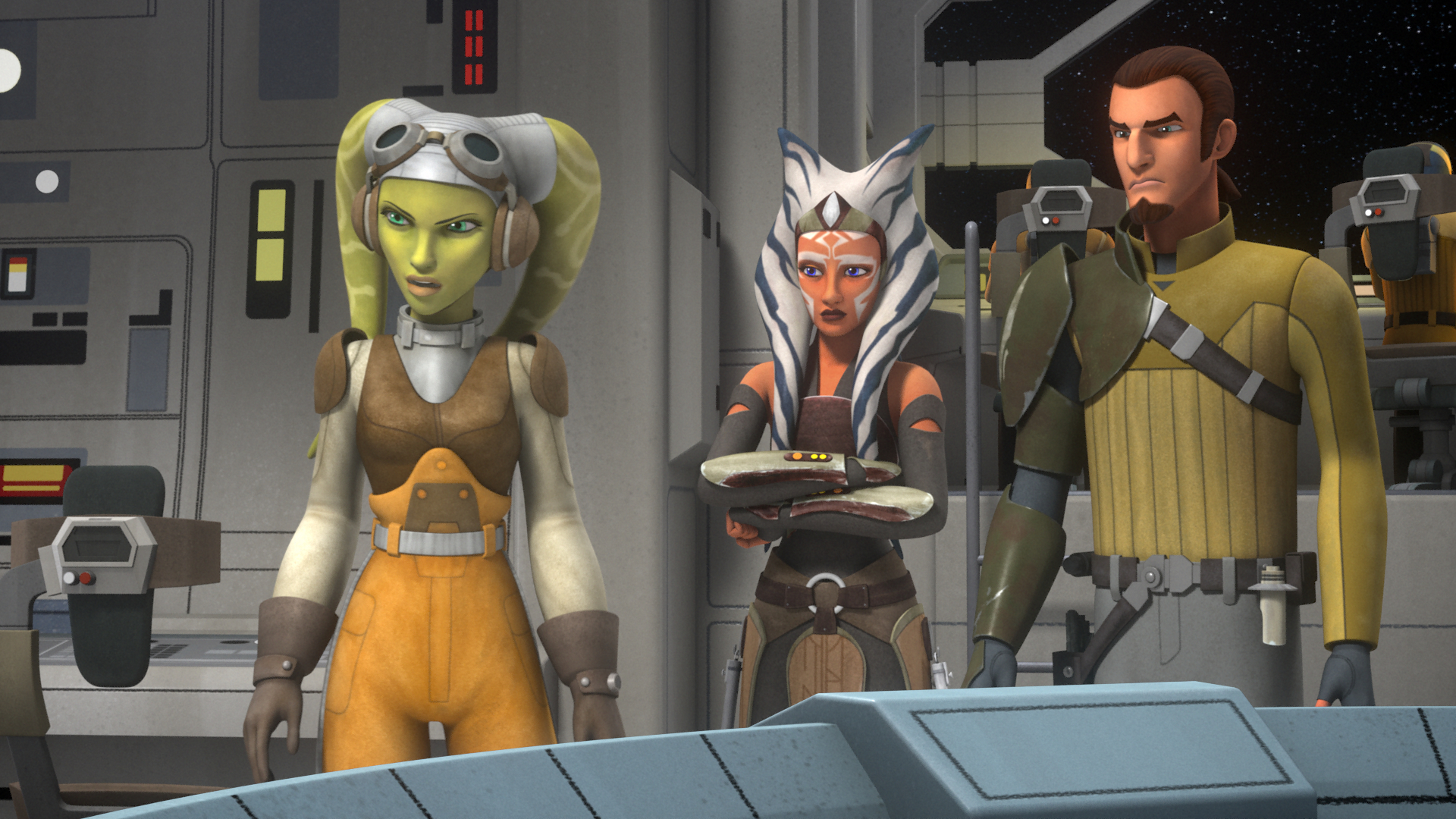 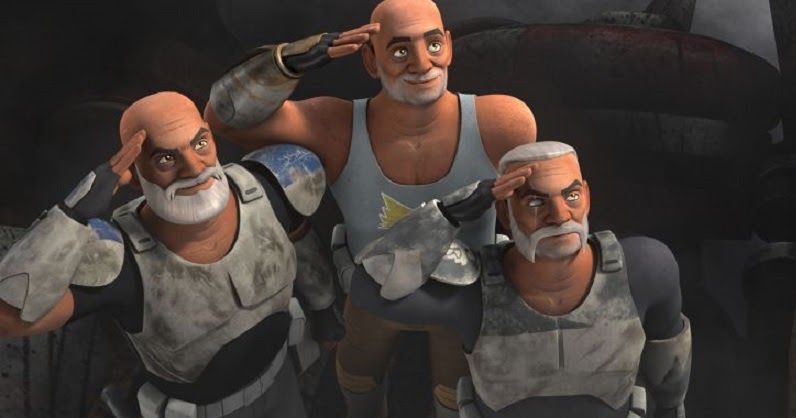 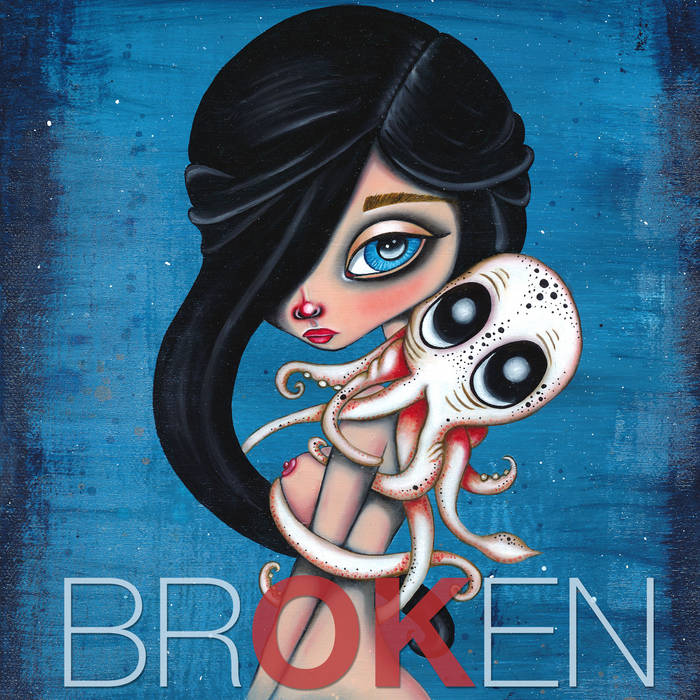 Dep is a music act (Danny E. Peck) that exists in a strange region between ambient and orchestral. The songs (sometimes with vocals) have a very muted chill out vibe, but utilize orchestral musical languages. Very intriguing and draws you into the musical landscape.