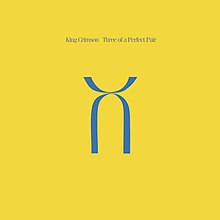 This is the KC album I remember waiting for. Checking the music store weekly until its release in NZ.

To coincide with the release, the band set off on a Japanese tour (as can be seen on the Neal and Jack and Me DVD) at the end of the same month, followed by a lengthy tour through the US and Canada, culminating in a pair of concerts in Montreal in July (immortalized on the Absent Lovers album). The album and tour were the final recorded and live statements for the 1980s band, with the various members returning to their solo interests immediately afterwards.

It’s an experimental and unique album that brings 80s contemporary influences into the mix, while also staying true to King Crimson’s legacy of unforgiving vision.

Three of a Perfect Pair
One of the most radio-friendly song by the band to date. The guitars lock in together rather than teetering on the edge of falling apart. There is a steady beat and some of Adrian’s best lyrics.

one, one too many
schizophrenic tendencies
keeps it complicated
keeps it aggravated
and full of this hopelessness
what a perfect mess…

Model Man
Might be an eighties new wave ballad. It pulses along nicely with minimal frippertronics and a great chorus.

Sleepless
Another great Belew song will a nice call/response between the string players. It is best known for its distinctive opening bass-line which features Tony Levin slapping on the strings to create its pulsating beat. It came from Levin’s habit of tapping the strings in rehearsal as well as at sound-checks. The 2001 re-release features several different versions of the song. The opening bass-line has been used as the show theme for Australia’s RAGE program, since 1987. There was a video made of the song for MTV.

Nuages
brings with it a shift. Building off a beat with electronic pads from Bruford and some Frippertronic noises, it gradually builds into a darkly ambient, floating piece with odd guitar solos from Belew.

Industry
rolls in slowly. Frippertronics take centre stage over a barrelling low end from Levin and Bruford’s shifting rhythm. More modal experimentation, with outbursts from the rhythm section that seem uncertain, sudden, jarring. A distorted guitar fades in threateningly, moving inside and out of the pounding rhythms, now completely maniacal. The piece builds and builds, slowly, but soon all tentativeness is lost. It is marching right out of the speakers at us, coming for us. Soon even the guitars begin to hide in the shadow, screeching and sliding away from the madness.

Dig Me
hearkens to days of yore, with a whacked out guitar rhythm and a rhythm section that sounds like it’s just struggling to keep up, with metric and modal shifts uncertainly off-centre with one another, a disturbed vocal melody that swings in all the chaos, a song on the verge of falling apart completely.

Larks’ Tongues in Aspic Part III closes the album well, opening with frenetic Frippian guitar work and moving into an updated interpretation of the old theme from the classic 70s album of the same name, Bruford’s rhythms feel at home in this twisting instrumental, menacing in the right ways but more willing to have fun than the previous versions. More interlocking guitars create off-balance harmonies. Still, it’s just not quite as powerful as the 70s conceptions.

This final piece of that studio output is augmented with extra tracks including all of the mixes of Sleepless, two slabs of electronica and the band’s only recorded excursion into barber shop quartet vocals complete with humorous lyrics “We’re the King Crimson band, we don’t do 21st Century schizoid Man..’ Ultimately, a King Crimson lineup including all four members of the 80s band, would perform Schizoid Man, but that would have to wait for another decade.