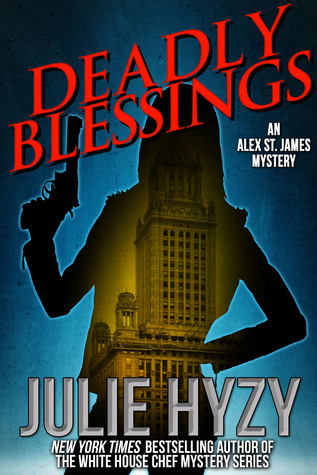 It’s not often Alex St. James has a story like this fall into her lap, only to have it snatched away again. As news researcher at Midwest Focus Television in Chicago, she’d been set to interview a young Polish immigrant woman, pregnant by a Catholic priest. When the woman is found murdered, and Alex tries to investigate, her boss abruptly reassigns her to a fluff piece, so he can give the hot murder story to the station owner’s nephew. But anyone who knows Alex also knows that like Fate, she’ll find a way. Acting without authority and without assistance, she continues to investigate, making some very powerful people in the Chicago Archdiocese uneasy. Suddenly Alex finds herself in the middle of a plot so sinister and far reaching that the very next thing she might hear are her own Last Rites. Award-winning mystery author Julie Hyzy has also written several award-winning science-fiction short stories. She lives in the suburbs of Chicago.

It’s not that there is anything badly done, it’s just that
… The pacing is too slow
… I can deal with a first-person female protagonist, but all that happens is centered around hairdressers !
… for a crime novel there isn’t much crime or action and after a quarter of the book has gone it’s looking like there won’t be much coming up.

So once again I’m ending a book because of slow pacing and lack of a plot.