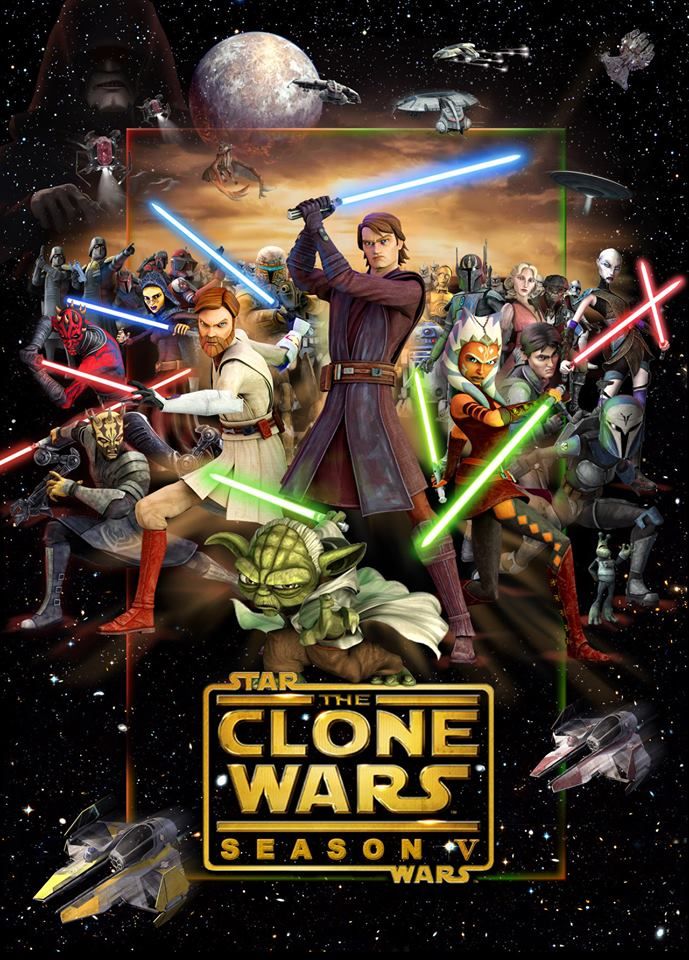 Season five is notable to focusing more on secondary characters.
There is a plot arc involving R2D2 in a barren planet. And at the end, Ashoka has some real character growth when she leaves the Jedi Order.

5.01 “Revival”
Darth Maul and Savage Opress steal a fortune of republic credits, and bribe a squad of pirates to take down a pirate stronghold run by Hondo. Obi-Wan and Jedi Master Adi Gallia intervene, but Savage kills Adi. Obi-Wan fights Savage and Maul and cuts off Savage’s left arm. The brothers flee to their ship under fire from Hondo and the pirates.

5.02 “A War on Two Fronts”
On the Separatist world of Onderon, a group of rebels call for the assistance of the Jedi. Ahsoka, Anakin, Rex, and Obi-Wan go to train the rebels to fight.

5.03 “Front Runners”
Ahsoka Tano, now leading the rebels on Onderon, but forbidden to fight, puts their training to use by having them hi-jack an AAT and blow up the main power station for the capital city of Onderon.

5.04 “The Soft War”
Sanjay Rash, Onderon’s puppet king, accuses Ramsis Dendup, the deposed king, of inciting the rebellion against his rule and orders his execution.

5.05 “Tipping Points”
The rebels on Onderon struggle to reclaim their home planet. After the Republic and the Jedi High Council refuse to give Ahsoka Tano and the rebels assistance, Anakin Skywalker persuades Hondo Ohnaka to supply illegal rocket launchers to the rebels.

5.06 “The Gathering”
Ahsoka and Yoda take a group of younglings to a cave on Ilum to perform a Jedi rite of passage called “The Gathering”, where they will each have to face an internal fear or flaw in order to retrieve a Kyber crystal so they can begin building their own lightsabers.

5.07 “A Test of Strength”
While returning to Coruscant with their lightsaber crystals, the younglings are attacked by Hondo, who wants to steal their crystals and sell them.

5.08 “Bound for Rescue”
With Ahsoka captured by Hondo, the younglings go to Florrum to rescue her, against the wishes of Obi-Wan Kenobi.

5.09 “A Necessary Bond”
To revenge himself on Hondo for his past capture, Count Dooku has General Grievous attack the pirates’ lair on Florrum, so Ahsoka and Hondo must join forces in order to survive this encounter.

5.10 “Secret Weapons”
R2-D2 is part of a team of Republic droids chosen for an important mission led by the diminutive Colonel Meebur Gascon to obtain an encryption module from a Separatist dreadnought.

5.11 “A Sunny Day in the Void”
After their ship crashes on a desolate planet, D-Squad and Colonel Gascon must find a way off to get back to Coruscant, or be stranded forever.

5.12 “Missing in Action”
Colonel Gascon and D-Squad discover that Abafar, the planet they are trapped on, is Separatist-controlled, but they also discover a Republic Clone Commando named Gregor, who has been stranded on the planet as well.

5.13 “Point of No Return”
After believing themselves safe, Colonel Gascon and D-Squad discover that they are prisoners of the Separatists in a captured Republic cruiser, finding themselves enmeshed in thwarting a plot to destroy a Republic space station holding a strategic conference.

5.14 “Eminence”
Darth Maul and Savage Opress form an alliance with the Mandalorian terrorist group Death Watch and several crime syndicates in order to take over Mandalore and defeat Obi-Wan Kenobi.

5.15 “Shades of Reason”
Maul’s alliance helps the Death Watch and their leader, Pre Vizsla, conquer Mandalore and imprison Duchess Satine, but Vizsla’s ambitions surface and he betrays Maul, who later challenges him to a duel. After killing Vizsla, Maul assumes control over a majority of the Death Watch.

5.16 “The Lawless”
Maul proceeds to lure Obi-Wan Kenobi to Mandalore with news of Satine’s capture.

Note: This episode is dedicated to Ian Abercrombie.

Supervising director Dave Filoni said that Abercrombie was very excited that Darth Sidious finally was going to be seen in person and not as a hologram anymore. During Celebration VI, Filoni mentioned that before his death, Abercrombie recorded for most of season five as the character, but did not finish, so actor Tim Curry was brought in to voice Palpatine.

5.17 “Sabotage”
After Ahsoka manages to rescue Anakin from certain peril on Cato Neimoidia, the two are called back to Coruscant from the front lines to investigate a terrorist bombing at the Jedi Temple.

5.18 “The Jedi Who Knew Too Much”
Ahsoka Tano is blamed for the murder of Letta Turmond, the key suspect in the bombing, and is detained by Admiral Tarkin.

5.19 “To Catch a Jedi”
While on the run in the underworld of Coruscant, pursued by Republic authorities, Ahsoka makes a deal with Asajj Ventress to find out who the actual murderer of Letta Turmond really is.

5.20 “The Wrong Jedi”
Prosecution begins for Ahsoka in the High Courts after the Jedi Council expels her from the Jedi Order. Although cleared of all charges, Ahsoka leaves the Jedi Order.