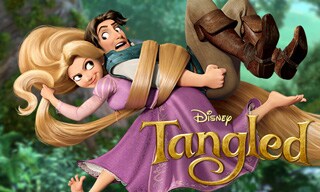 Tangled is a 2010 musical adventure produced by Walt Disney Animation. It is the 50th Disney animated feature film.

Loosely based on the German fairy tale “Rapunzel” in the collection of folk tales published by the Brothers Grimm. The film tells the story of a lost, young princess with magical long blonde hair who yearns to leave her secluded tower. Against her mother’s wishes, she accepts the aid of an intruder to take her out into the world which she has never seen.

In Tangled he is Flyn Rider; thief, rogue and ladies man. He rescues poor Rapunzel from her tower and gets nothing but grief for it. She assaults him (frequently), threatens him and leaves him for dead.

Then, at the end gets all weepy  over him!

This is another favorite. As usual, it’s got everything, a strong story and fun characters.  I do remember being very impressed in the theatre during the lantern scene.

But by far the best character is super sleuth, tracker and warrior Maximus (the horse).