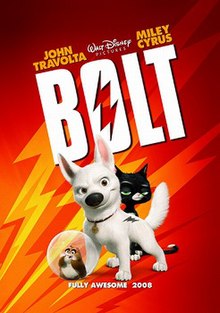 It is the 48th Disney animated feature film. Directed by Chris Williams and Byron Howard. The film’s plot centers on a white dog named Bolt who, having spent his entire life on the set of a television series, thinks that he has super powers. When he believes that his human owner, Penny, has been kidnapped, he sets out on a cross-country journey to rescue her.

Now we are getting into the second ‘golden’ period of Disney animated films. This is fully CGI animation with an extraordinary amount of detail. The films starts with a fantastic chase sequence before slowing down and getting into explaining the situation and plot.

From there, it’s a road trip with Bolt, Mittens and Rhino. The three work well together, thanks to some great script writing. And in the final act Bolt has to perform a heroic act for real.

Everything just works in this movie.