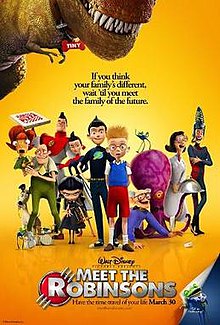 Meet the Robinsons is a 2007 American computer-animated science fiction comedy film produced by Walt Disney. It is the 47th Disney animated feature film. The film is loosely based on characters from the children’s book “A Day with Wilbur Robinson”, by William Joyce.

Of all the previous Disney films, this is the first I recall seeing in the cinema. I remember it as a favorite, and seeing it again reinforces that view.

It’s just a great science fiction story. The main protagonist is suitably nerdy and cute. And the story unfolds in surprising directions, but it does allow the audience to guess the true nature of Lewis.

There is a great cast of strange characters. And the main villain, while the real mustache twirling  type does have a backstory and motivation.