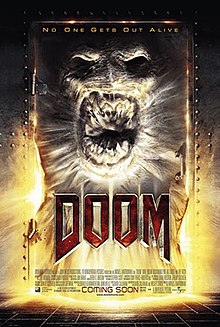 Doom is a 2005 science fiction horror film directed by Andrzej Bartkowiak. It is loosely based on the video game series of the same name by id Software.

In the film, a group of Marines are sent on a rescue mission to a facility on Mars, where they encounter genetically engineered creatures.

The film was a box office bomb, grossing $58.8 million worldwide against a production budget between $60–70 million.

Despite the poor reception, I almost like this film. It starts off as being very derivative of Aliens; macho soldiers prepare for war. Then it’s off to Mars to slaughter aliens. The first half is fairly conventional as one by one they die.

Of course big stars like Urban and Johnson get to live to the end. Then in the third act things change from the formula. There is a bit more tension and some very good fight scenes.