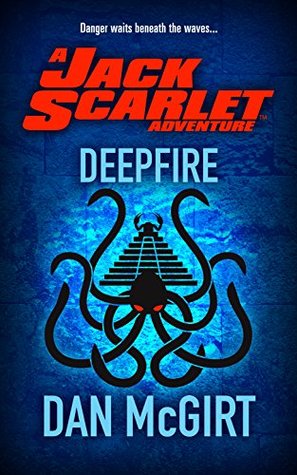 Danger waits beneath the waves…

A desperate call for help propels action ace Jack Scarlet to the Gulf of Mexico to stalk a sea monster, battle an army of ruthless mercenaries, outwit a scheming dictator, and find a vanished research ship and the sexy scientist who disappeared along with it.

Jack Scarlet is some mix of the Lone Ranger, James Bond and Houdini. McGirt is probably better known for his comedy fantasies.

Here he takes on a thriller, but without the humour. Instead it’s an over the top action adventure where the hero escapes almost every encounter to defeat the bad guys. And when he doesn’t, it’s just to that we can get lots of exposition from the villain regarding his evil plot.

Not the best of its type, but fun and fast paced.