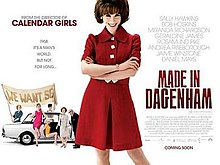 Made in Dagenham is a 2010 British film directed by Nigel Cole. The film stars Sally Hawkins, Bob Hoskins, Miranda Richardson, Geraldine James, Rosamund Pike, Andrea Riseborough, Jaime Winstone, Daniel Mays and Richard Schiff. It dramatises the Ford sewing machinists strike of 1968 that aimed for equal pay for women. The film’s theme song, with lyrics by Billy Bragg, is performed by Sandie Shaw, herself a native of the area and a former Ford Dagenham clerk.
A stage musical version of the film opened at London’s Adelphi theatre in 2014.

A straight forward telling of the story of the strike. Not much in the way of the unexpected, and it comes to a predictable conclusion.
(3/5)