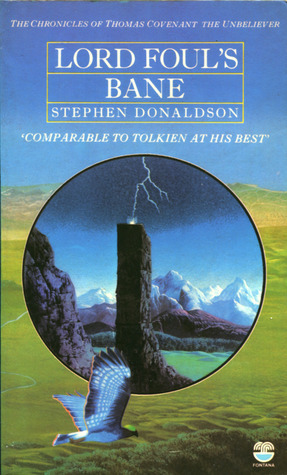 Originally purchased in the 1970’s, the paperback sat on my shelf for years, eventually being joined by…

That were not purchased.

The books are about  Thomas Covenant the Unbeliever  in a strange alternate world. He was a leper, but in the new world he is  regarded as a reincarnation of a great hero.

Generally well-written and clear. However very slowly paced. I managed to get through about 40% of the first book.

Then there was a massive info-dump back story and it became clear that this author was not going to follow the axiom ‘show, don’t tell’.

After a massive groan I put the book down and have not returned.