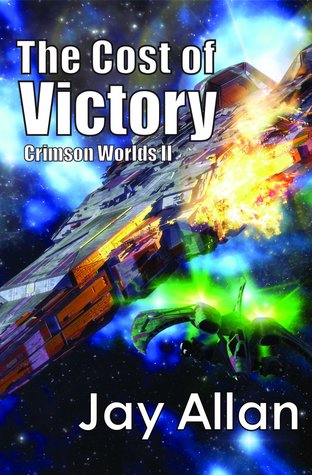 The Third Frontier War is raging, and all across human-occupied space worlds are burning. Massive fleets struggle for dominance and kilometer-long war ships exchange thermonuclear barrages.

Battered in the early years of the war, the Western Alliance is resurgent. The brilliant Admiral Augustus Garret leads the Alliance fleet from victory to victory, taking the war to the very heart of the enemy empires. And on the ground, Colonel Erik Cain, hero of the Marine Corps, leads his crack troops again into combat, seeking the final battle.

In the second book, the narrative switches from first person to third person. Unfortunately this doesn’t help. Now there are multiple threads, and none explain the war.

This allow the author to introduce the ‘evil’ guys. And they are of the moustache twirling variety. Any shades of grey have gone, everyone is either good or bad.

Now the story becomes less interesting. Combined with the war stories that feel more like documentary reporting, I lost interest. Ended at 48%.