Out of the Soylent Planet
(Rex Nihilo)
by Robert Kroese (2017) 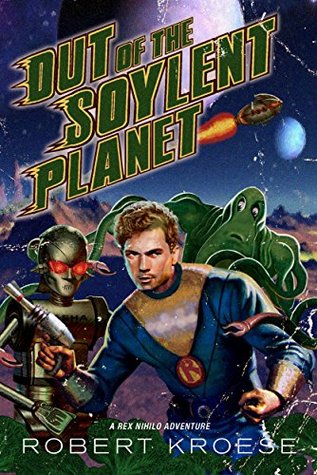 Interstellar con man Rex Nihilo has a price tag on his head. Railroaded into smuggling a shipment of contraband corn to a planet short on food, Rex finds himself on the run from an insidious corporation named Ubiqorp, which reaps obscene profits by keeping planets dependent on shipments of synthetic rations.

When Rex and his long-suffering robot companion Sasha are sentenced to work as slave labor on a massive Ubiqorp plantation, they learn the terrible secret behind the corporation’s products.

Robert Kroese is a Star Wars fan. This is apparent immediately as he rips off scenes from the original film series.