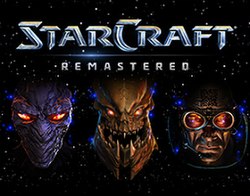 Starcraft was originally released on March 31, 1998. I’m sure I have played it at least twice through (including the sequel Brood War).

The original game was released wit ha resolution of 640×480, sufficient for games of the time but now out of date. On 14 August 2017 it got a Hi-Def upgrade, released as  Starcraft: Remastered.

Installation.
I had already purchased the Starcraft Compilation (required to play the game). So re-installed the game from the Blizzard site then went looking the the ‘Remastered Upgrade’ to install. Couldn’t find it anywhere, so tried playing the installed game. It had a new intro screen proclaiming ‘Starcraft: Remastered’, but it looked just like the old game. It took some digging around in the settings to work out that checking the ‘HD’ box was all that was required. Why wasn’t it on by default ?