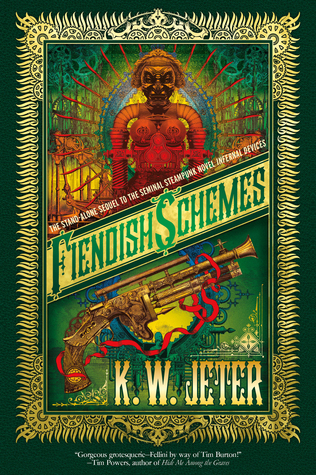 The world Dower left when he went into hiding was significantly simpler than the new, steam-powered Victorian London, a mad whirl of civilization filled with gadgets and gears in the least expected places. After accepting congratulations for his late father’s grandest invention—a walking, steam-powered lighthouse—Dower is enticed by the prospect of financial gain into a web of intrigue with ominously mysterious players who have nefarious plans of which he can only guess.

Another try at a K. W. Jeter book.  This is the second in his steampunk trilogy. The first “Morlock Night” I had read in 2013, so had little memory of it.

This is written in a very florid and verbose style, trying to emulate the ethos and style of the Victorian era. It is well done, and works as it’s written in first person and the protagonist is not that smart and almost an un-reliable narrator.

There is considerable detail and explanation of the invented world. And it does stretch on with excessive dialogue. But at almost halfway through it becomes clear that this is a case of style over substance. Dower gets taken to a brothel and the author seems intent on explaining more of his world than pushing on with the story.

It this point I became frustrated and stopped reading.