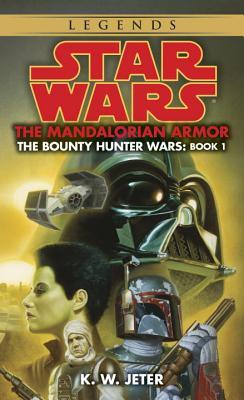 He’s the most feared and successful bounty hunter in the galaxy. He is Boba Fett, and even the most hardened criminals tremble at his name. Now he faces the deadliest challenge of his infamous career–an all-out war against his most dangerous enemies.

K. W. Jeter has always been a reliable author, notable in his ‘Kim Oh’ series of thrillers. In this Star Wars book, he is not so good. Where, in the thrillers things move fast and break, here it’s all exposition and talk. Boba Fett is first introduced after his experience in the Sarlac pit of ‘The Empire Strikes Back’. Turns out he survives, just. He is taken for recuperation by an unknown alien.

Then a young woman turns up looking for him. It’s not clear she is and what she wants. Then there is a jump back in time to Boba Fett and his working to plot against smugglers. It’s all a bit slow and political. Nothing much happens, and the jumping between timelines doesn’t help.

So ultimately I tired of the lack of any clear plot and just gave up.