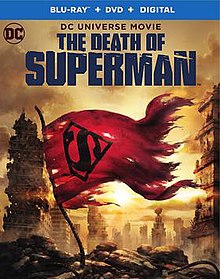 The Death of Superman is a 2018 American animated direct-to-video superhero film produced by Warner Bros. Animation and DC Entertainment. It is based on the DC comic book storyline of the same name. The film, which chronicles the battle between Superman and Doomsday.

This was a rather adolescent film. Firstly, the character design of superman just looks wrong. And the voice doesn’t match the character. In fact all the male characters sound very similar. The only voice actors of note are Nathan Fillion (Green Lantern) and Rain Wilson (Lex Luthor).

The graphic design is basic and  functional.

Unfortunately the story really lets things down. There is some time spent on establishing the relationship between the major characters.  As if anyone watching would not be aware of the Superman/Clark Kent/ Lois Lane  relationship.

But the main story is:
Creature Villain shows up, starts destroying things.
After everyone in the Super Hero League gets punched around and put down, Superman shows up.
Big battle at the end; beast dies; superman killed (but is he ?)

There is nothing special here. It’s just the biggest punch that wins the fight. No co-ordination between heroes, no revelations of motivation or reason for the beast. Nobody tries to find a weak spot of vulnerability of the creature.

It’s all very boring and predictable.