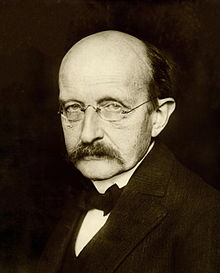 On this day in 1900, Max Planck derives Planck’s law of black-body radiation.

Black-body radiation
The problem had been stated by Gustav Kirchhoff in 1859: “How does the intensity of the electromagnetic radiation emitted by a black body (a perfect absorber, also known as a cavity radiator) depend on the frequency of the radiation (i.e., the color of the light) and the temperature of the body?

The question had been explored experimentally, but no theoretical treatment agreed with experimental values.

Planck deriving the first version of the famous Planck black-body radiation law in a meeting of the Deutsche Physikalische Gesellschaft on 19 October 1900 and published in 1901.

This first derivation did not include energy quantization, and did not use statistical mechanics, to which he held an aversion.

In November 1900 Planck revised this first approach, relying on Boltzmann’s statistical interpretation of the second law of thermodynamics as a way of gaining a more fundamental understanding of the principles behind his radiation law.

As Planck was deeply suspicious of the philosophical and physical implications of such an interpretation of Boltzmann’s approach, his recourse to them was, as he later put it, “an act of despair … I was ready to sacrifice any of my previous convictions about physics”.[20]

The central assumption behind his new derivation, presented to the DPG on 14 December 1900, was the supposition, now known as the Planck postulate, that electromagnetic energy could be emitted only in quantized form, in other words, the energy could only be a multiple of an elementary unit:

where h is Planck’s constant, also known as Planck’s action quantum (introduced already in 1899), and ν is the frequency of the radiation.