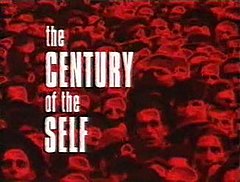 The Century of the Self is a 2002 British television documentary series by filmmaker Adam Curtis. It focuses on the work of psychoanalysts Sigmund Freud and Anna Freud, and PR consultant Edward Bernays. In episode one, Curtis says, “This series is about how those in power have used Freud’s theories to try and control the dangerous crowd in an age of mass democracy.”