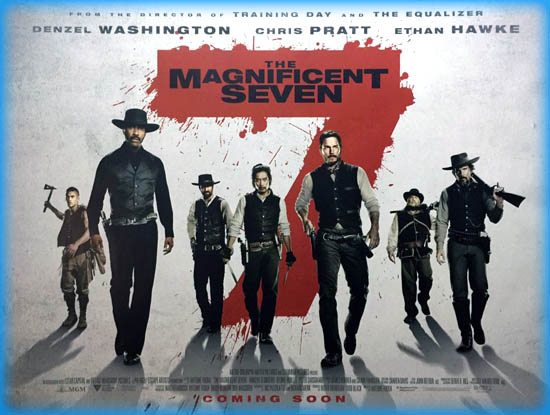 The Magnificent Seven is a 2016 American Western directed by Antoine Fuqua.

It was the final film of composer James Horner, who died the previous year after composing part of the score; his friend Simon Franglen completed the music.

Very simple story. Bad guy comes to town and offers to buy land for a cut price. Shoots a few people and leaves. Female protagonist (it’s a modern remake) hires vigilantes to defend the town.  Everyone turns up and war starts.

Well, this has all the tropes and clichés of the western. Have not seen the films this was based on, but it’s a revenge story made all the easier by a really nasty villain.

Most of the film is fun up to the big battle where all logic disappears. It’s a bit like a Tower Defense computer game, or ‘Home Alone’ for adults.

Nobody has heard of soap. And how everyone determined who was on which side became a bit of a mystery.

There seems to be an endless supply of bad guys. Good guys have instant kills, baddies miss. Then the Gatling gun comes out – he really should have lead with that !

At the end the woman turns up to finish the job.

Still, enjoyable for what it was; a bit of escapist entertainment.