Based on the fairy tale Cinderella by Charles Perrault, it is the twelfth Disney animated feature film.

Al Hoffman wrote the songs, which include “Cinderella”, “A Dream Is a Wish Your Heart Makes”, “Sing Sweet Nightingale”, “The Work Song”, “Bibbidi-Bobbidi-Boo”, and “So This is Love”.

At the time, Walt Disney Productions had suffered from losing connections to the European film markets due to the outbreak of World War II, enduring some box office bombs like Pinocchio, Fantasia, and Bambi.

It is the first Disney film in which all of Disney’s Nine Old Men worked together as directing animators. After two years in production, Cinderella was finally released on February 15, 1950.

It became the greatest critical and commercial hit for the studio since Snow White and the Seven Dwarfs.

The first thing I noticed was the portrayal of Cinderella as a woman clearly in her mid twenties. Being of fairy tale origins, variations dating back to 7BC you would have expected a teenage girl.

The story shows it fairy tale origins in having a very clear distinction between the good Cinderella and the evil stepmother and her daughters.

There isn’t much to the story, so Disney pad it out with lots of cute animals (some that sing) and a villainous cat Lucifer that almost steals the show.

It’s all very cute, at times funny and with the inevitable ‘They all lived Happily ever after’ – YUK!! 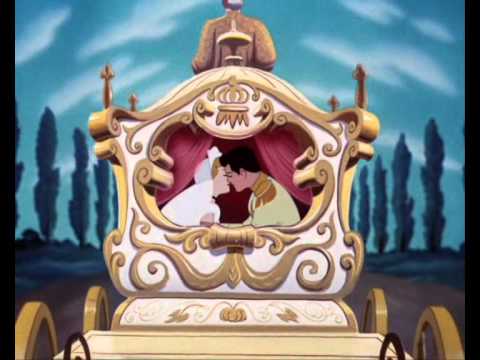