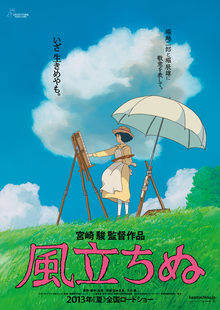 The Wind Rises is a 2013 Japanese animated historical drama film written and directed by Hayao Miyazaki, animated by Studio Ghibli.

The Wind Rises is a fictionalized biopic of Jiro Horikoshi (1903–1982), designer of the Mitsubishi A5M fighter aircraft and its successor, the Mitsubishi A6M Zero, used by the Empire of Japan during World War II. The film is adapted from Miyazaki’s manga of the same name, which was in turn loosely based on both the 1937 novel The Wind Has Risen by Tatsuo Hori and the life of Jiro Horikoshi.

The Wind Rises was the highest-grossing Japanese film in Japan in 2013. It won and was nominated for several awards, including nominations for the Academy Award for Best Animated Feature, the Golden Globe Award for Best Foreign Language Film, and the Japan Academy Prize for Animation of the Year.

Originally seen March 2018 from a DVD purchased at the Armageddon show.

While beautiful to look at (even the images of war have an engaging style) this is does not have the same emotional intensity of previous Miyazaki films I have seen: ‘When Marnie Was There’ and ‘Princess Kuguya’.

After watching, you have to remind yourself that these were devices for destruction. The result is that the film’s theme is one of the creative impulses, even in times of war.