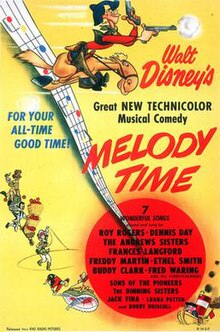 It was released to theaters on May 27, 1948. Made up of seven segments set to popular music and folk music, the film is, like Make Mine Music before it, the popular music version of Fantasia.

Melody Time, while not meeting the artistic accomplishments of Fantasia, was mildly successful.

Once Upon a Wintertime
This segment features Frances Langford singing the title song about two romantic young lovers on a winter day in a late 1800s. This is intertwined with a similar rabbit couple.

Bumble Boogie
This segment presents a surrealistic battle for a solitary bumble bee as he tries to ward off a visual and musical frenzy. The music is by  Freddy Martin And His Orchestra and is a swing-jazz variation of Rimsky-Korsakov’s Flight of the Bumblebee.

The Legend of Johnny Appleseed
This segment is a retelling of the story of John Chapman, who spent most of his life roaming Mid-Western America (mainly Ohio and Indiana) in the pioneer days, and planting apple trees,
thus earning his famous nickname.

Little Toot
This segment is based on the story of “Little Toot” by Hardie Gramatky, in which a small tugboat, wanted to be just like his father Big Toot, but couldn’t seem to stay out of trouble. The Andrews Sisters provide the vocals.

Trees
This segment featured a recitation of the 1913 poem “Trees” by Joyce Kilmer and music by Oscar Rasbach performed by Fred Waring and the Pennsylvanians.

Blame It on the Samba
This segment has Donald Duck and José Carioca meeting the Aracuan Bird, who introduces them to the pleasures of the samba. The accompanying music is the 1914 polka Apanhei-te, Cavaquinho by Ernesto Nazareth. The Dinning Sisters provide the vocals while organist Ethel Smith appears in a live-action role

Pecos Bill
The final segment is about Texas’ famous hero Pecos Bill. He was raised by coyotes (similar to how Mowgli was raised by wolves in The Jungle Book) and later became the biggest and best cowboy that ever lived.

It also features his horse Widowmaker, and recounts the ill-fated romance between Bill and a beautiful cowgirl named Slue Foot Sue, whom he falls in love with at first sight. 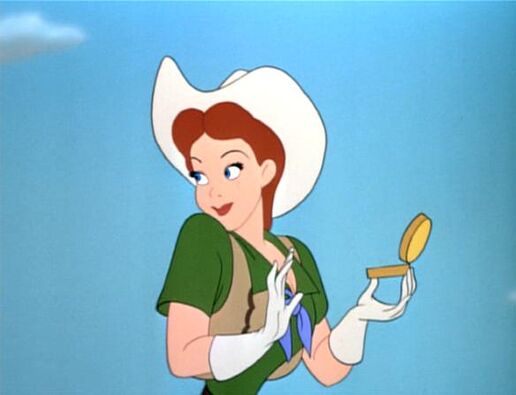