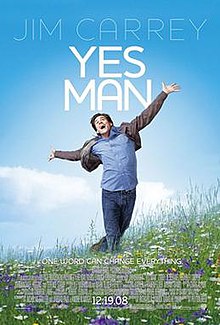 It stars Jim Carrey and Zooey Deschanel. The film is based loosely on the 2005 book of the same name by humorist Danny Wallace, who also makes a cameo appearance in the film.

Although I hadn’t seen this film, I knew kiwi Rhys Darby was in it. The film also stars Bradley Cooper and Terrance Stamp.

Another example of an old guy (Carrey was 46) and young woman (Deschanel was 28) comedy romance.

Carrey plays Carl, a banker stuck in his ways and needing a jolt to get him out of his rut. It comes in the form of a club/movement ‘Yes Man’. So when Carl starts saying ‘Yes’ to everyone you know things will go wrong, and they do, but it gets him a new romance and outlook on life.

Carrey is his usual frenetic self, goofing around and having fun. However it’s Deschanel who anchors his character and the film.

During the end credits the characters put on Rollerman Suits and take off down a highway.