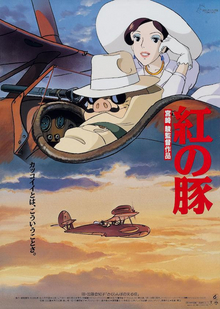 Porco Rosso from 1992 is the nest Studio Ghibli film. It was written and directed by Hayao Miyazaki.

It is based on Hikōtei Jidai (“The Age of the Flying Boat”), a three-part watercolor manga by Miyazaki.

Porco Rosso is a man/pig fighter pilot from the first work war who operates as a bounty hunter in the Adriatic Sea. Why he is a pig hybrid is never explained, however the story indicates at the end he may have changed again. The main story is about his conflict with an American pilot and his friendship with a female hotel owner.

The story moves along at a good pace and in only 90 minutes it provides action, adventure and plenty of dogfights. There is humour and a touch of romance. Despite the dark undertones of the era between the wars, the film has a light and fun tone.