It was recently announced that all the films of Japanese film Studio Ghibli were to be released on Netflix. While I have seen a few, I will be watching all the films in chronological order.

Although it was made before Studio Ghibli was founded, this film is considered a Ghibli work. 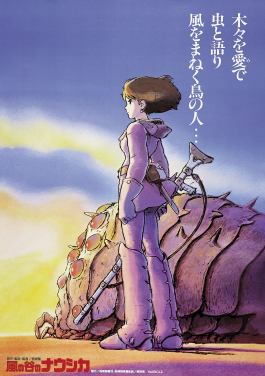 Nausicaä of the Valley of the Wind is science fantasy adventure film adapted and directed by Hayao Miyazaki, based on his 1982 manga of the same name.

Set a thousand years in the future, long after environmental devastation, the people have a strange combination of medieval costumes but with futuristic flying machines.

The film tells the story of Nausicaä, the young princess of the Valley of the Wind. She becomes embroiled in a struggle with Tolmekia, a kingdom that tries to use an ancient weapon to eradicate a jungle of mutant giant insects. It’s the relationship between Nausicaä and the bugs that is central to the film.

The animation is beautifully drawn, the characters movements and the direction are excellent. The score is mainly orchestral, but uses occasional pop songs that seem out of context.

After a slow start, the story moves quickly and constantly surprises. There is no good vs evil, each side of the conflict have understandable motivations.

The film covers themes of environmentalism and anti-war. Although not as good as some of the films to come, enjoyable and worth watching.