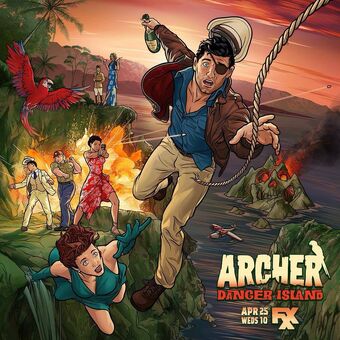 This series takes place in 1938. Same cast, but playing different versions of their characters.

Archer, who was found shot in actress Veronica Deane’s pool at the conclusion of season seven, remains in a coma, and the events of the season are of his imagination.

The season’s premise sees Archer as an alcoholic co-pilot with Pam, who crash lands onto the lush and mysterious Pacific island of Mitimotu.

This feels like a combination of “The Secret of Monkey Island” and an Indiana Jones movie.

According to creator Adam Reed, this is inspired by the short lived 1980s television series “Tales of the Gold Monkey” which featured a very similar premise as Danger Island. An this show was aired following the success of the film Raiders of the Lost Ark the previous year.

Because of all the derived tropes and plot it is not as original as previous series and subsequently my least favorite.