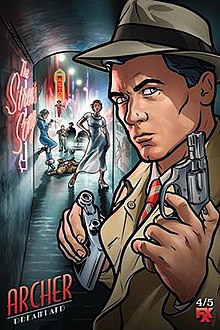 The eighth season of Archer, known as Archer Dreamland, began airing on April 5, 2017

After the cliffhanger from last season, it is revealed that Archer survived but has been in a coma for three months, trapped in a 1947 noir-esque Los Angeles setting called Dreamland.

It also reveals the fate of Woodhouse (whose original voice actor George Coe died in 2015), the heroin-addicted valet of Archer dying shortly before the season premiere.