Earth has fallen into an ice age following a bungled geo-engineering attempt to fix climate change.

Snowpiercer is a “Science Fiction” movie with a daft concept that involves a giant allegorical train that goes continually travels the Europe continent, for years. It contains the last remains of humanity, living from the poor in the rear to the rich in the front and ultimately the creator at the engine. 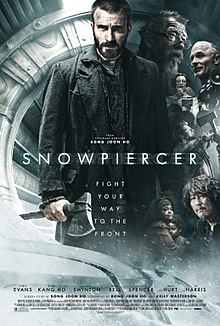 The director and co-writer is Bong Joon-ho, who also directed Okja (previously reviewed).

The cast includes Chris “Captain America” Evans (who I didn’t recognize) and Tilda Swinton in ridiculous ‘Evil Henchman’ mode. Also along for the ride are John Hurt and Jamie Bell. And at the end we get Ed Harris.

Among the unwashed proletariat revolution is being fermented by Curtis Everett (Evans) and his loyal sidekick Edgar (Bell).
Their immediate target is to get through the gates to the next set of carriages, which are protected by brutal, gun-wielding guards. A lot of this movie makes no sense. Rather it seems to be a series of violent battles with numerous thugs. And train varies in width, and from the CGI exterior shots is much, much larger on the inside.

The tone is dark and brooding, just an endless supply of blood and dirt. It’s as if Terry Gilliam had been hired to rewrite Samuel Beckett.

The way the allegory works out is not exactly subtle or unexpected, and at the end you get a lecture on man’s inhumanity to man. Not much of a treat.