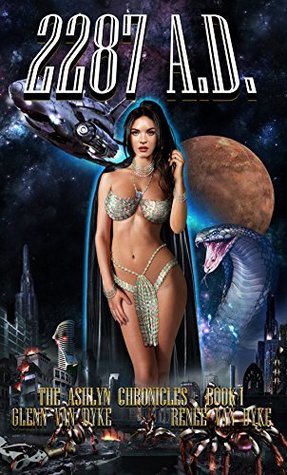 2287 A.D. follows the lives of Ashlyn Parker and Steven Sherrah, the man who is in command of Earth’s last surviving starship. He has been struggling to keep the handful of Earth’s survivors alive, hiding from the most vicious and powerful enemy humanity has ever known, an enemy that is relentless in his determination to see that every last human is killed.

His life is turned upside down as Ashlyn, a woman genetically engineered to be mentally and physically perfect – the next step in humanity’s evolution, awakens from stasis. For her protection, she had been cryogenically frozen when Earth was attacked. Her return is brutal, for she awakens fifteen years later into a post-apocalyptic Earth to find that everyone she had known before is gone, the world destroyed.

It sounds like a good premise, has a sexy cover. But the predominance of one star reviews should have been a clue. Very little of the story makes sense. While the writing is OK, after a while it feels like an editor is needed to cut out all the explanations, internal dialogue and wandering about.

There may be a better novella in there, but it’s buried by the slow pacing.