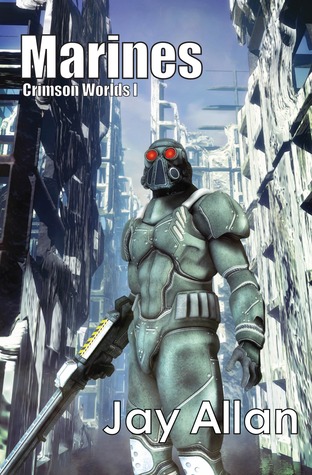 Erik Cain joined the marines to get off death row. The deal was simple; enlist to fight in space and he would be pardoned for all his crimes.

In the 23rd Century, assault troops go to war wearing AI-assisted, nuclear-powered armor, but it is still men and blood that win battles. From one brutal campaign to the next, Erik and his comrades fight an increasingly desperate war over the resource rich colony worlds that have become vital to the economies of Earth’s exhausted and despotic Superpowers.

Fast paced and interesting Military Science Fiction. The first person narrative helps confine the story to single engagements and focus on the fighting and life of a soldier. It’s not until the later stages of the story the the overall picture of a splintered earth and multiple colonies on other worlds becomes apparent.

The appendices, while detailed help little in explaining the motivations of each group.

What’s lacking (and hopefully will be explained later) is why the human groups are at war.