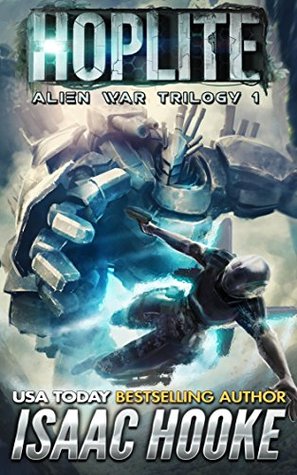 Rade Galaal and his elite team are dispatched to the farthest reaches of known space to investigate the disappearance of a classified new supercarrier.

Equipped with Hoplites, powerful battle suits laden with enough firepower to raze a small city, Rade and his team explore the barren world where the starship issued its final transmission.

But shortly after they land, things start to go very wrong.

This is an author firmly in the genre of modern Military Science Fiction. The plot revolves around an Army battalion using mechanized exo-skeletons. It’s a bit like Timothy Zahn’s Cobra series and B. V. Larson’s military sci-fi work.

While there is lots of action, it never has much in the way of weight or consequences. And while competently written, it never really takes off and drives the intensity and  adventure.

The Bobiverse Series by Dennis E. Taylor is a better recent read, and nothing really compares to the John Scalzi ‘Old Man’s War’ series.

So in the end, this is just ‘meh’ and after getting half-way through I gave up.