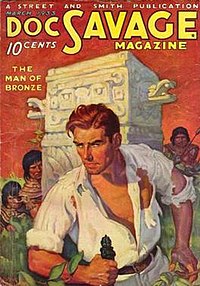 High above the skyscrapers of New York, Doc Savage engages in deadly combat with the red-fingered survivors of an ancient, lost civilization. Then, with his amazing crew, he journeys to the mysterious “lost valley” to search for a fabulous treasure and to destroy the mysterious Red Death.

Marvel Comics editor Stan Lee has credited Doc Savage as being the forerunner to modern superheroes. And it’s easy to see why. He’s tough and fit, smart in every way possible and indestructible. Also, for this first story he can anticipate his enemy’s moves.

The prose is tight, terse and moves the plot along a a great pace. While not giving the intensity and thrills of a modern thriller, it’s certainly entertaining.