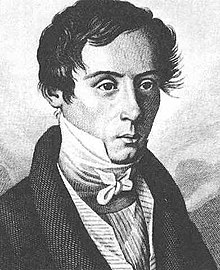 In 1818 French physicist Augustin Fresnel submits his prizewinning “Memoir on the Diffraction of Light”, precisely accounting for the limited extent to which light spreads into shadows, and thereby demolishing the oldest objection to the wave theory of light.

Fresnel (10 May 1788 – 14 July 1827) was a French civil engineer and physicist whose research in optics led to the almost unanimous acceptance of the wave theory of light.

He is perhaps better known for inventing the catadioptric (reflective/refractive) Fresnel lens and for pioneering the use of “stepped” lenses to extend the visibility of lighthouses, saving countless lives at sea. The simpler dioptric (purely refractive) stepped lens, first proposed by Count Buffon and independently reinvented by Fresnel, is used in screen magnifiers and in condenser lenses for overhead projectors.