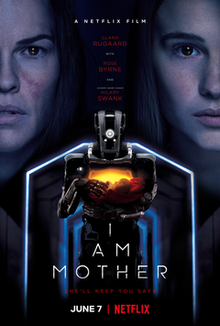 This is a science fiction thriller film directed by Grant Sputore, from a screenplay by Michael Lloyd Green. It stars Clara Rugaard (Daughter) , Rose Byrne (Mother) , and Hilary Swank as ‘Woman’.

Set after the human civilization has almost been eliminated. This is the story of Daughter, a young woman grown from an embryo and the start of the Human re-population of the earth.

The film takes on themes of Artificial Intelligence, genetics and philosophy.  Hilary  Swanks character enters half way through to upset the balance between the girl and her benevolent carer. It soon becomes clear things are not what they seem.

While the ending is somewhat ambiguous and not all plot threads are resolved (many questions left unanswered) it still is one of the best science fiction films I have seen for some time.

It’s notable for for Weta Workshop’s involvement in making and operating the robot. Adam Savage Interviews the robot.