What We Left Behind:
Looking back at Star Trek Deep Space Nine 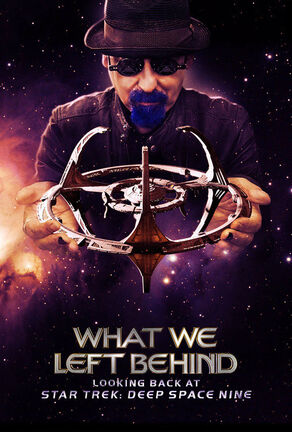 This film celebrates the 25th anniversary of the self-proclaimed ‘black sheep’ of the Star Trek spin-off series.

Often described as ‘dark,’ and edgy,’ as a show that did not fit into Gene Roddenberry’s vision of the future.

Trekkies try to credit the series for implementing  long form story arcs in network television. However history is clear that Michael Straczynski’s show was written in this way. Where DS9 started with self contained episodic shows, B5 was written to tell a five season space opera.

The DS9 film is a bit of a mish-mash of interviews, behind the scenes and extracts and commentary.

There is the pretense of writing a new season (#8) and the first episode is described, complete with story-board. This seemed completely unnecessary and distracting. Maybe it was a wish fulfillment for Ira Steven Behr (Director/Producer).

So overall, an interesting look-back. But not an invaluable resource for Trek fans. 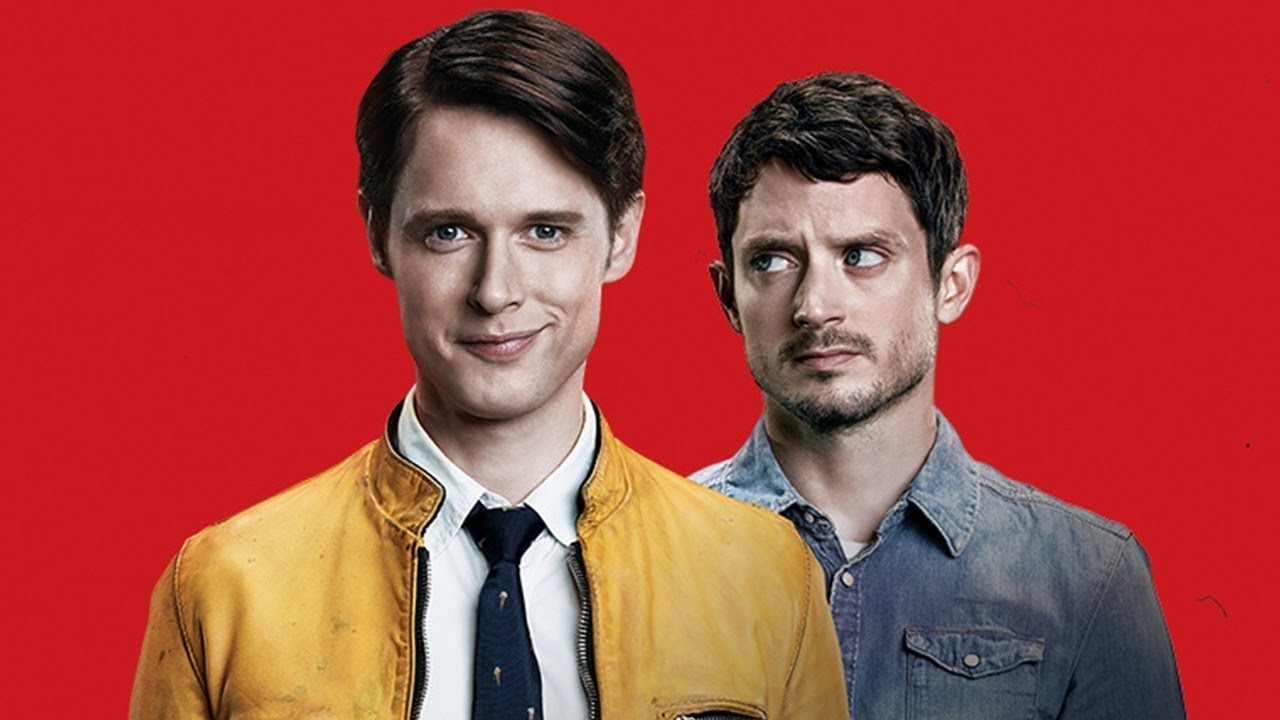 The only actor I recognized  was Elijah Wood (Frodo Baggins) who is the central character of the series.

And it’s…….. bizarre….. There are multiple plot threads:

Todd involved in a murder scene, his sister with a strange affliction. There is the woman who is seemingly immune to death. A gang of bald guys, a duo from the Military and a band of thugs. Nothing makes sense but becomes strangely involving.

It’s not until episode six (of 8) that things begin to coalesce. Turns out it is all about a time loop, started in 1880.

Then at the end it becomes apparent that the story has not ended, so it’s on to series 2. In 1914 Archduke Franz Ferdinand of Austria and his wife Sophie are assassinated in Sarajevo; this is the event that starts World War I. 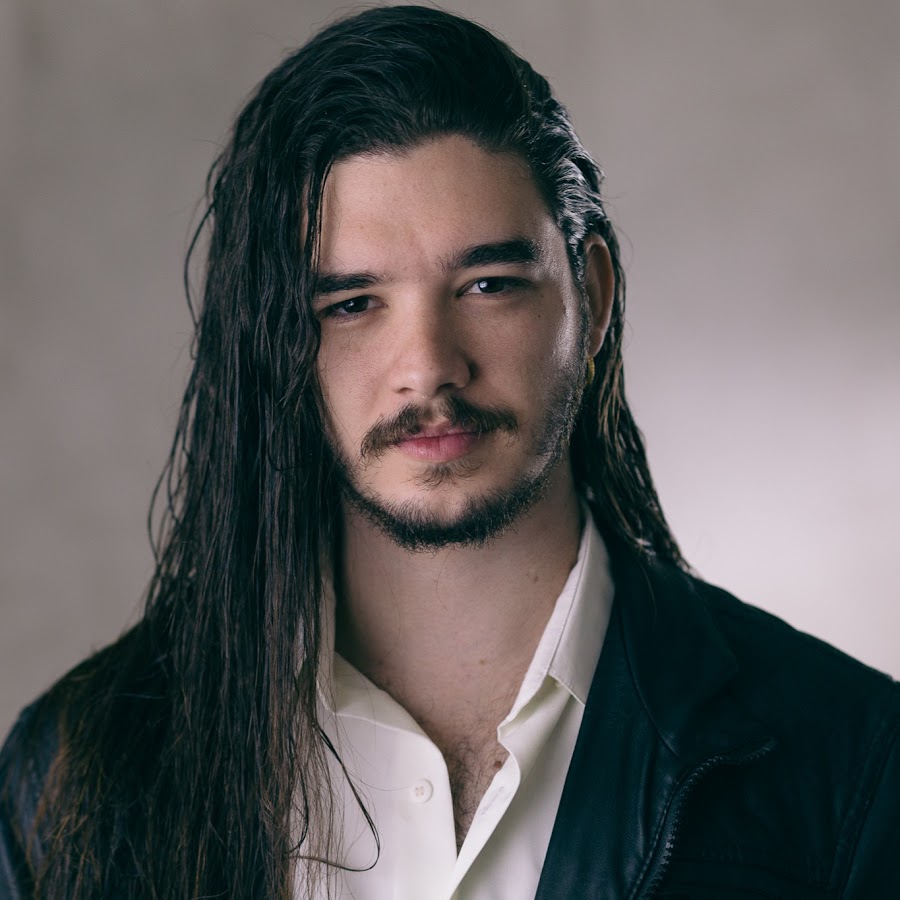 Daniel Vasconcelos is a singer that takes on everyone from A-HA to Nightwish and Steve Perry. He has a strong and versatile voice that can cover Operatic Styles…

He does a very effective version of Evanescance’s ‘Bring Me to Life’..

But despite the vocal pyrotechnics, sometimes just using his middle range gives the best results, as can be heard in Journey’s ‘Open Arms’.

Les liaisons dangereuses is a play by Christopher Hampton adapted from the 1782 novel of the same title by Pierre Choderlos de Laclos. The plot focuses on the Marquise de Merteuil and the Vicomte de Valmont, rivals who use sex as a weapon of humiliation and degradation, all the while enjoying their cruel games.

Their targets are the virtuous (and married) Madame de Tourvel and Cécile de Volanges, a young girl who has fallen in love with her music tutor, the Chevalier Danceny. In order to gain their trust, Merteuil and Valmont pretend to help the secret lovers so they can use them later in their own treacherous schemes.

On this day in 1984 – American singer Prince releases his most successful studio album, Purple Rain. Born on this day in 1952 – Tim Finn, New Zealand singer-songwriter. 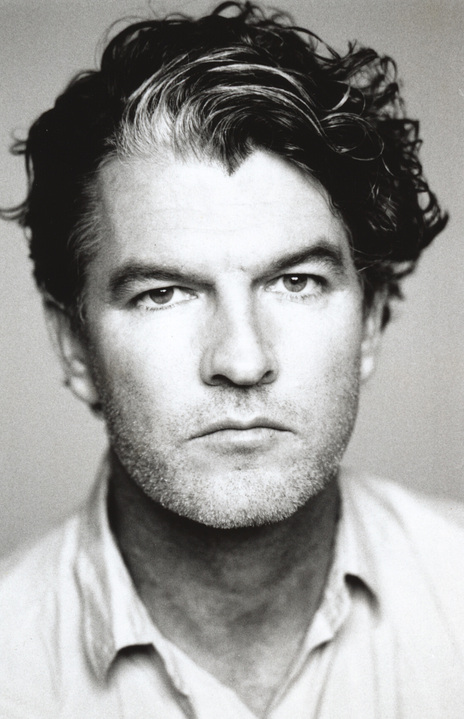 Love, Death & Robots is an American adult animated anthology web television series on Netflix. The series is produced by Joshua Donen, David Fincher, Jennifer Miller, and Tim Miller. Each episode was animated by different crews from a range of countries.

The series is a re-imagining of Fincher and Miller’s long in-development reboot of the 1981 animated science fiction film Heavy Metal.

This sets the style, with nudity, violence, an awesome beastly battle and a nice twist at the end.

Long after the fall of humanity, three robots wander through a post-apocalyptic city, trying to understand how humans lived based on their limited knowledge of them and the things they left behind.

Amusing little tale about the who real furry survivors of humanity will be.

A woman witnesses a murder in the apartment across from her hotel. The murderer realizes he has been caught, but notices the similarity between his victim and the witness, and he proceeds to chase her.

Very strange and stylized. With a bit of a head-scratcher  at the end that could be interpreted several ways,

Suits
A small community of farmers pilot mech suits to defend their land from an invading swarm of insectoid aliens dubbed “DeeBees”.

Fairly standard alien invasion story with a reversal at the end.

Sucker of Souls
Flynn, a hired mercenary, and Dr. Wehunt, an archaeologist, escape through an underground tunnel, fleeing an unknown assailant.

Another monster story. Rather gory despite the crude cell animation.

When the Yogurt Took Over  (John Scalzi)
A group of scientists mutate yogurt by fermenting bacteria. Although initial tests fail, a researcher takes the mutated bacteria home for her homemade yogurt, unaware that it has become sentient.

Very funny and satirical story of how yoghurt evolves past humanity.

Beyond the Aquila Rift  (Alastair Reynolds)

Blue Goose’s crew members Thom, Suzy, and Ray, are on a mission to reach beyond the Aquila Rift, but an error in the routing plot causes unexpected events to happen. Thom is greeted by Greta, an old flame, and is told he is hundreds of thousands of light years from Earth centuries later.

Amazing photo-realistic animation and detailed sets, with an end that initially is just confusing.

Beautifully drawn combination of eastern style and steampunk. A story of retribution

A city inspector tries to convince Ugly Dave Dvorchek to move out of his house which is located in a dump.

Fun story of an old man with an unusual pet.

In a world where werewolves are common knowledge, but discriminated against, two close werewolf friends who serve in the US Marines, Lt. Decker and Sgt. Sobieski, are taken by surprise when
escorting a convoy.

Military story with werewolves – what next ?

Alexandria Stephens attends to a faulty satellite in Earth orbit. While in mid-operation her old model EVA suit is randomly hit by a stray screw from orbital debris, damaging her oxygen tanks,
disabling the mobility unit and casting her hopelessly adrift in open space.

The one story I didn’t like. Just too gory.

Two salesmen get stuck in the desert after their Plymouth breaks down due to a broken radiator. Spending what remained of their day around the car, the older man informs the younger man that the desert was once a sea floor, and they soon discover that the desert is not what it seems at night.

More fantasy than science fiction, kind of mystical with an unexpected ending.

After two crews on the Dropship Lucky 13 are lost, other Marines become superstitious and give the unlucky ship to rookie Lt. “Cutter” Colby.

Good story by an author on my reading list. Somewhat predictable, but enjoyable.

Journalist Claire Markham is invited to interview reclusive artist Zima Blue, who wishes to tell his story before unveiling his final work. Zima, who began in portraiture, moved on to abstract
murals with the main focus on abstract shapes in a single shade of blue. He continued making larger murals until they were incorporated into celestial bodies, asteroids, and even Nebulas.

One of my favorites, due to it’s stylized drawing and science fiction theme of the difference between humans and the machines we make.

A cyborg crew- Hawk, Kali, Sui and Rookie- attempt to rob a convoy for a heavily guarded microchip as it is in motion to a tunnel. As they plant explosives on the back car, Sui drops one of his when swerving to avoid a desert rat, alerting the guards.

All action and not much logic. This feels more like an extract from a teenage TV show.

Gail and Rob move into the apartment finding an antique refrigerator. Opening it to get ice, they find a preserved Mammoth the size of a sand grain, and returning to the freezer they find a fast-
moving time-dilated civilization developing.

This stars Mary Elizabeth Winstead and Topher Grace (That 70’s Show). At first the characters appear to be animations, but I later found that they were shot live-action. A fascinating story of
a civilization evolving in the space of a few days.

Fun little animation with progressively wild and strangely specific circumstances leading to the death of Hitler.

A platoon of Red Army soldiers hunt demons in the Siberian forests. Sgt. Sergei Pavlovich and his Lieutenant raise concerns the men are too dispersed, but the Major dismisses their worries. As the
Germans lay siege to Stalingrad, the Red Army Platoon continue without support into the forest.

Another bloody war story of an army vs creatures from the depth. While the animation is very realistic, the story is basic. 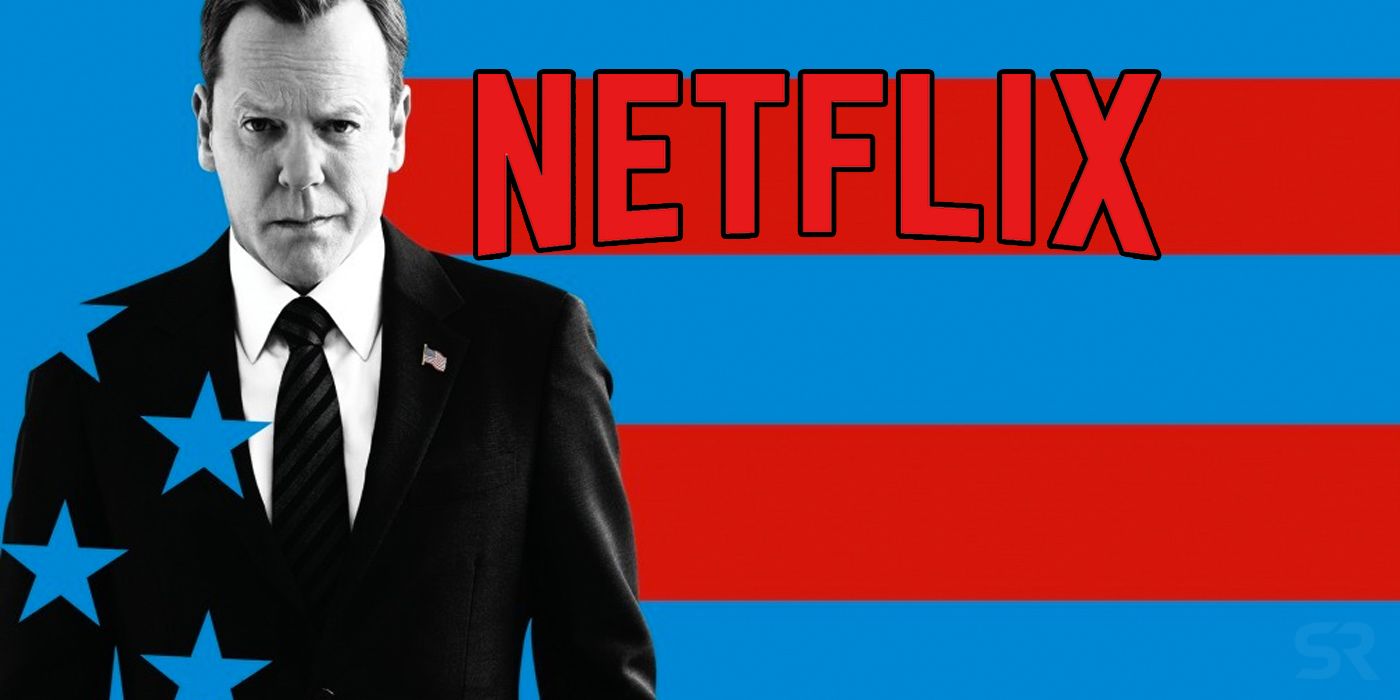 Series 3 has been taken over by Netflix. And it’s a short 10 episode series. Gone is the attempt at humour in the second series. Now it’s more ‘West Wing’ or ‘Madam Secretary’.

An it’s a lot more topical, seeming to exist in a parallel world to the current Trump administration. Unfortunately there are far too many plot elements. The bio-terrorism threat seems tagged on to keep a few actors employed. The gay romance story was just unnecessary and the bed-hoping among major characters detracted from the politicking that was far more interesting.

Then in the final episode it did seem that the president was talking about our world and not his. So an OK series, but certainly not as good as the first series. 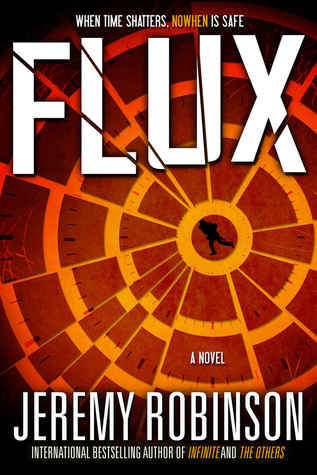 For Owen McCoy, a typical day on the job as head of security for Synergy, a research company conducting mysterious experiments, is boring at best. And that’s the way he likes it. Patrolling the Appalachian mountainside, where his now deceased father taught him how to hunt, is relaxing and connects him to the past.

But today is not a typical day on the job. It begins with asking a thief to join him for breakfast. Seeking to set the young man on a better path, Owen invites him to walk the perimeter with him and consider a more honest living. Before their patrol can begin, they discover evidence that the facility has been breached. When Owen’s truck explodes, he’s confused, but ready for whatever might come his way.

At least, he thinks he is. 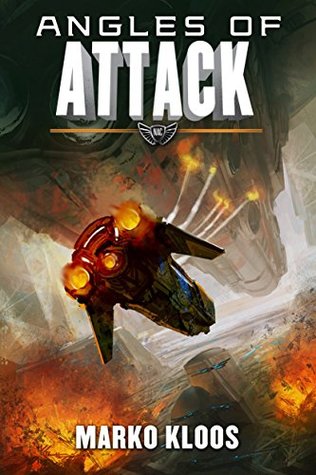 The first in the series was good, the second not as good but the third tanks. While I could put up with the slower pacing in the second, this third novel just takes it’s time a bit too much. Too much ‘hurry up and wait’.

And the plot seems to lose  focus, just what it this about; fighting the aliens or internal conflict among the forces ?

Then I started reading earlier chapters. There is something seriously screwed up with the formatting of this book. About a third of the way through the preface turns up ??