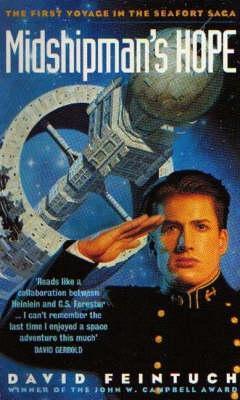 A hideous accident kills the senior officers of UNS Hibernia, leaving a terrified young officer to take 300 colonists and crew aboard a damaged ship, on a 17-month gauntlet to reach Hope Nation. With no chance of rescue, Nicholas Seafort must save lives and take them, in the name of duty.

This clearly draws on 18th Century British Naval tradition as its social and disciplinary foundation. Which is to say, it’s rigid, authoritarian, and unrelentingly brutal. In fact there are no sympathetic characters in this book.

The whole premise of the book is a disconnect. Set in the future, it presents a leadership structure and style out of date even in 20th century wars. The social rigidity and brutality just distract from the story. Behavioral studies, human psychology and sociology have advanced since then, so I don’t find it plausible that they could revert to this 18th century style.

In addition, the author goes to considerable length to create a situation where an inexperienced seventeen year old would command a star-ship.

As the plot proceeds, it becomes clear that the conflict will not be with the forces of nature, aliens or pirates but within the crew. This could have been set on a ship anywhere.

Eventually the plot contrivances and lack of any Science Fiction themes accumulate to a point almost halfway through where I gave up.