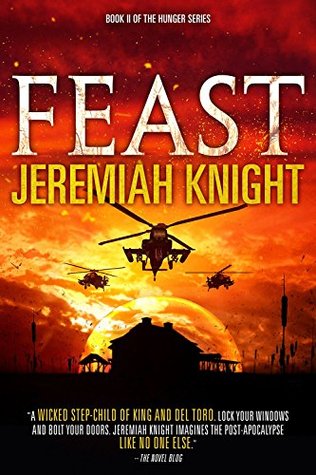 The sequel to Hunger

Racing against this impending outcome, Peter Crane and his family attempt to reach a laboratory in Boston, where a slim hope of saving the human race from extinction exists. But before heading northeast, they must visit the swamps of South Carolina’s Hellhole Bay to find a scientist who can help undo the damage done by ExoGen, the corporation that created and unleashed RC-714.

Where the first book was a road trip, this is more like a siege. The team take refuge at a bio-dome. They they get split, all the characters look to be converging for a final all-out battle.

This is even better then the first, thanks to a more complex plot and changing motivation of the characters.

But things end abruptly, as this is the second of a trilogy and despite the third (Famine) due in 2017, it has yet to turn up.