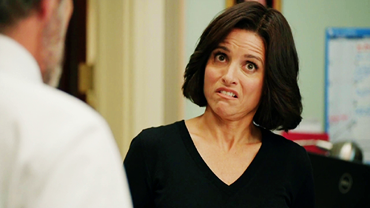 After a quick visit to their new campaign HQ, Selina and her team go on a ride-along with the Coast Guard, where they learn the president has flipped on a major issue (pro life/pro choice), which makes Selina meet different pressure groups and reexamine her own stance. Jonah stirs chaos with his new blog called ‘Ryantology’, angering Dan; Mike is called into work from his honeymoon. Meanwhile, Gary questions his role with the Veep and tries to come up with new ideas for the campaign.

Instead of doing all this pre-campaigning, sometime in the next 24 hours, you grab a mic, you say, “I’m Selina Meyer, and I’m running for President of the United States.”

Dan: You don’t announce your candidacy while the incumbent is still warm. That’s like trying to bang the widow at the funeral. You would have hear start her campaign with no strategy, no money, no staff except for [indicating himself…] Superman and […and Amy] Wonder Woman over there, just, [super-cutesy] “I wanna be President.”