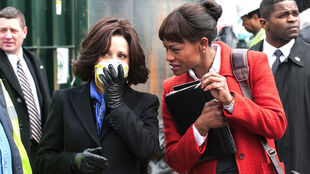 With D.C. in the midst of a government shutdown, Selina is forced to furlough some of her staff. Danny Chung takes advantage of the shutdown after a man is killed by a bear in Minnesota; Gary and Jonah go on a run to retrieve Selina’s trash; Dan tries to woo Sidney Purcell; Also, Andrew and Selina are starting to have sex again.

Yeah, I know he’s fucking furloughed because I’m the fucker who furloughed him.

You know, I didn’t realize how good I was at this job until someone else did it so badly.