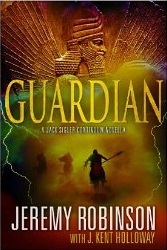 Jack Sigler, Callsign: King, has been a lot of things in his life. A soldier, a father, a hero. But now he’s taking up a new title: guardian.

After a life fighting billionaire madmen, terrorists and unnatural threats, he’s stuck thousands of years in the past, using his knowledge of history and modern warfare to right wrongs and stand up for those in need.

When he meets a twelve year old boy—the prince of the Babylonian Empire—who is to be sacrificed to the ancient goddess, Tiamat, by a twisted High Priest, King steps in, sword swinging. But what starts as a simple snatch and grab, quickly turns into a pitched battle against a legion of men and hideous creatures. As Tiamat rises from her ancient resting place, the fate of the world—and King’s future—is at stake.

Another fast paced, action filled adventure. This time Jack is battling ancient armies and gods. Will he ever die, well if you have read previous novels you will know the answer to that.