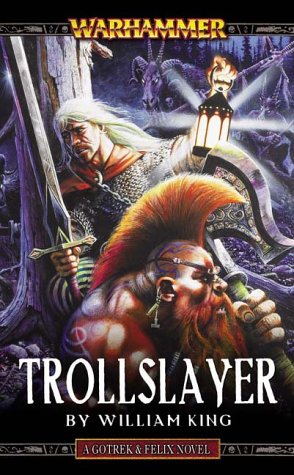 Trollslayer is the first part of the death saga of Gotrek Gurnisson, as retold by his traveling companion Felix Jaeger. Set in the darkly gothic world of Warhammer, Trollslayer is an episodic novel featuring some of the most extraordinary adventures of this deadly pair of heroes. Monsters, daemons, sorcerers, mutants, orcs, beastmen and worse are to be found as Gotrek strives to achieve a noble death in battle. Felix, of course, only has to survive to tell the tale.

This turned out to be a series of short stories about a human and dwarf. OK, but I think this type of fantasy works best in longer forms.